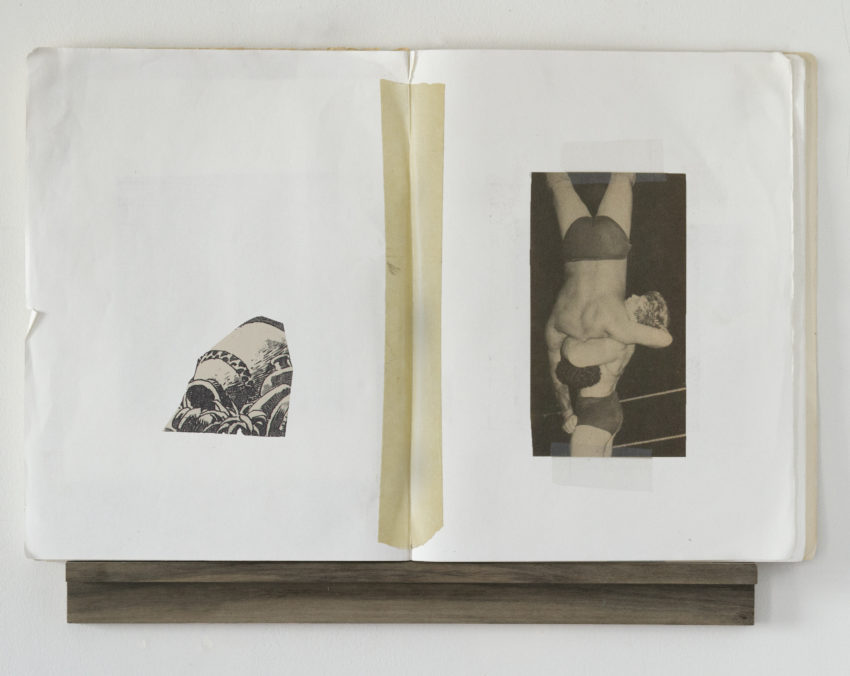 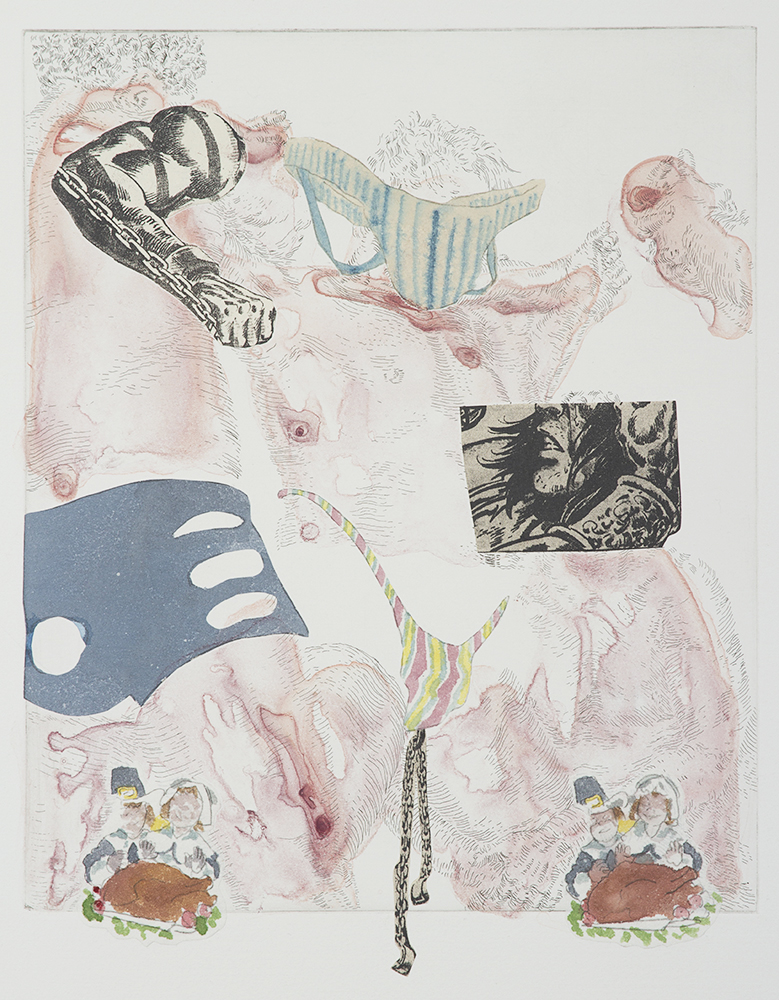 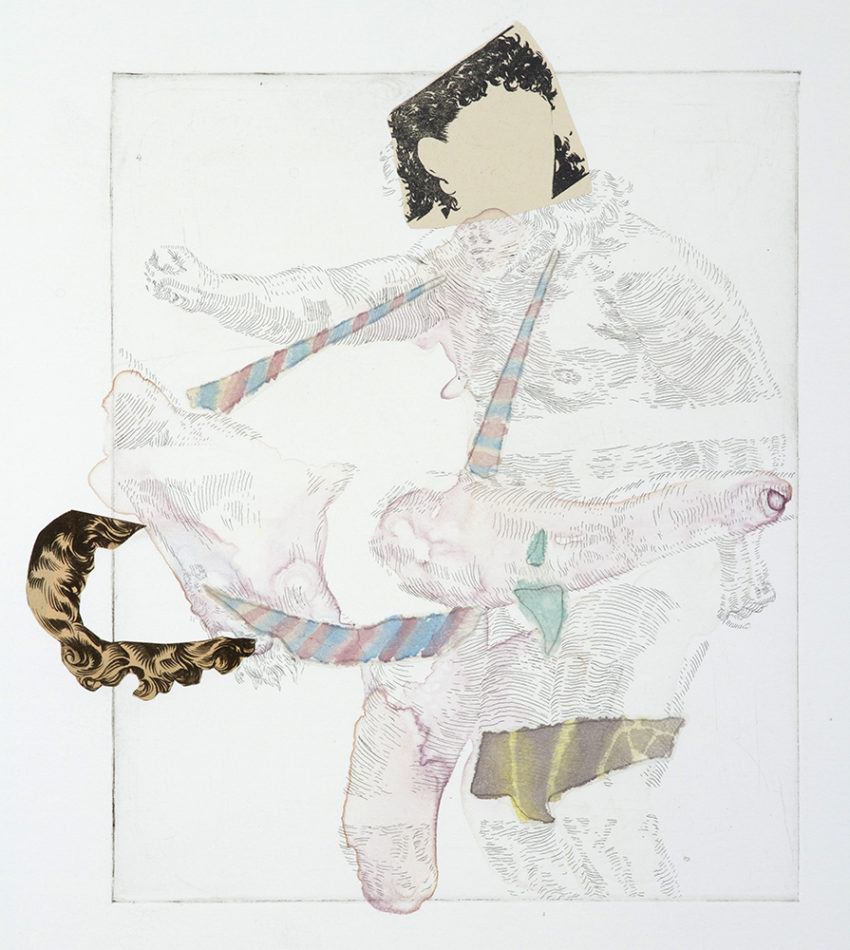 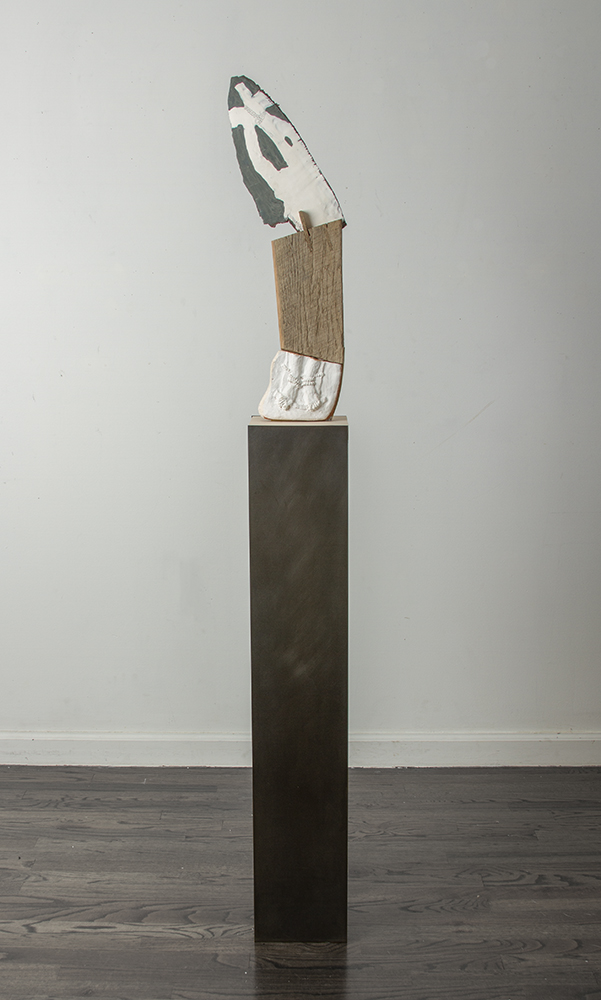 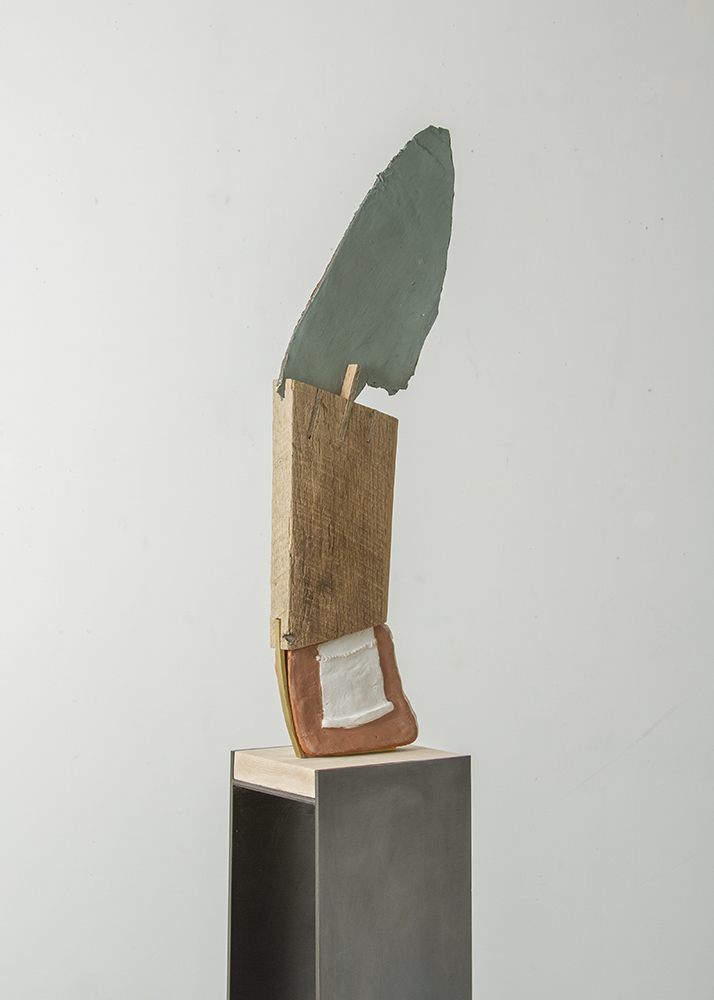 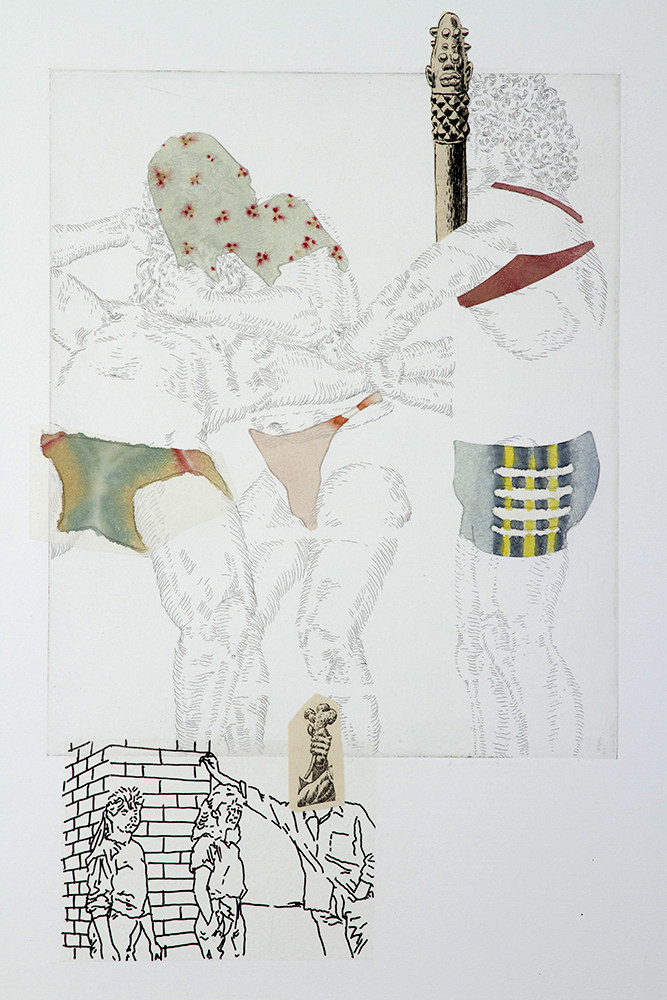 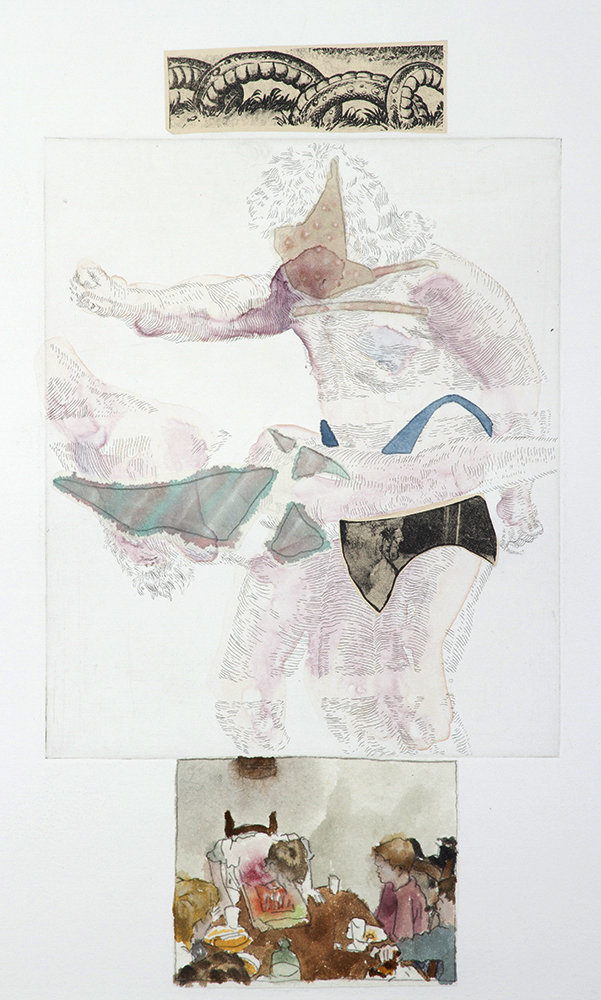 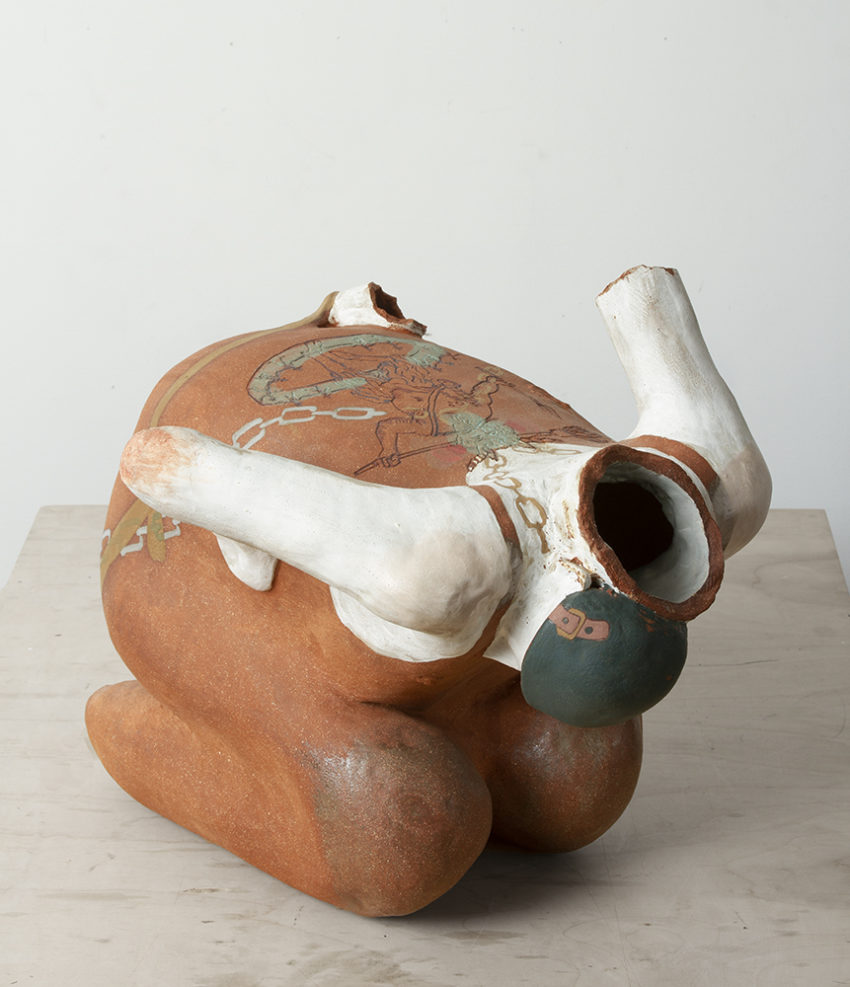 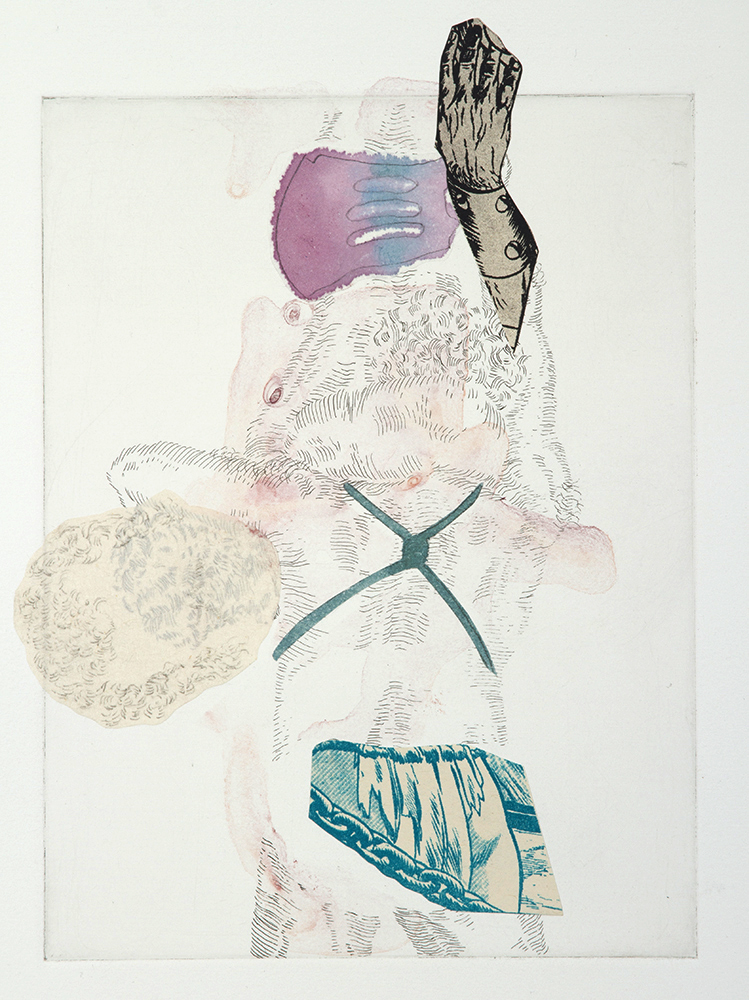 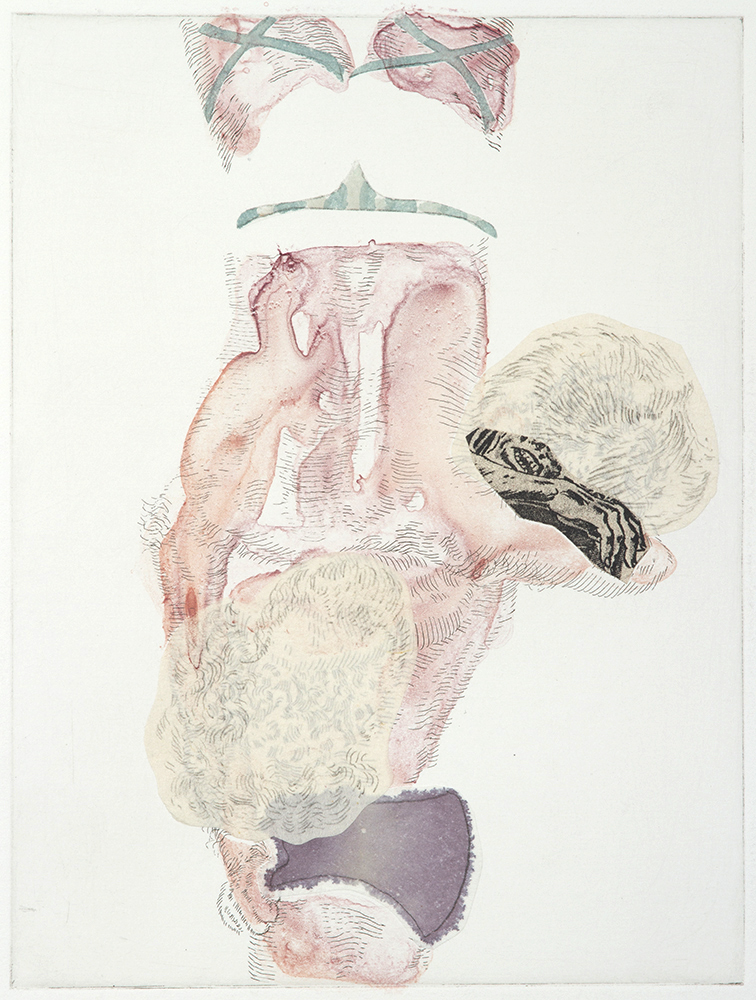 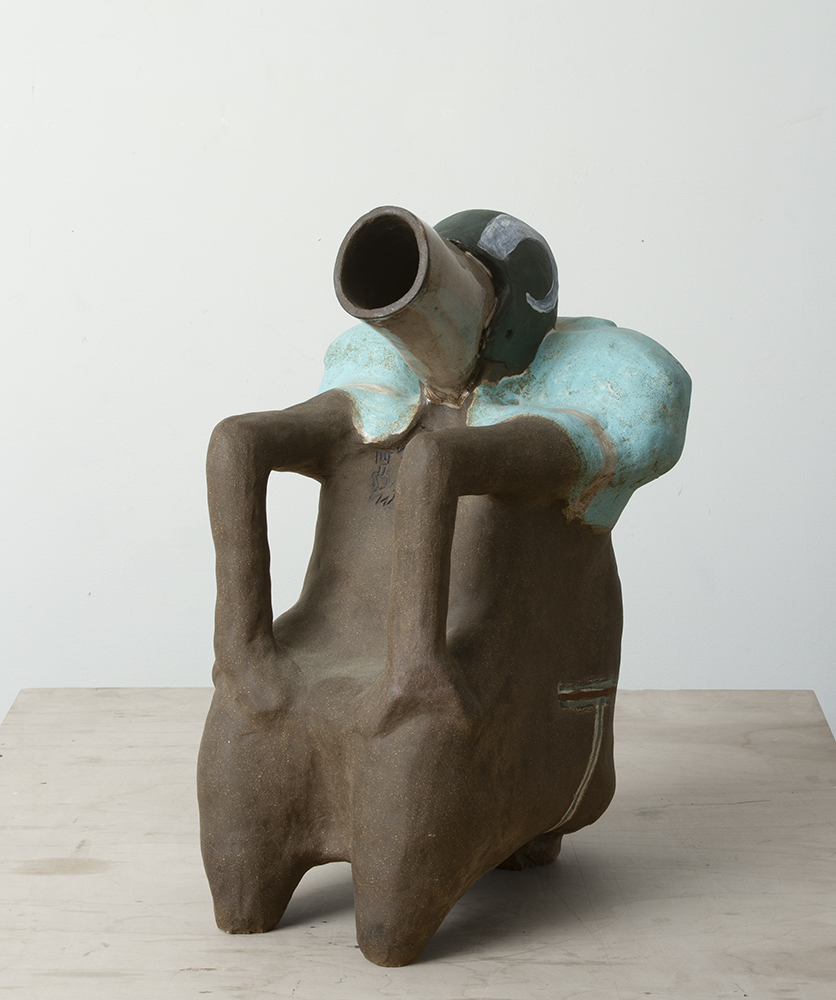 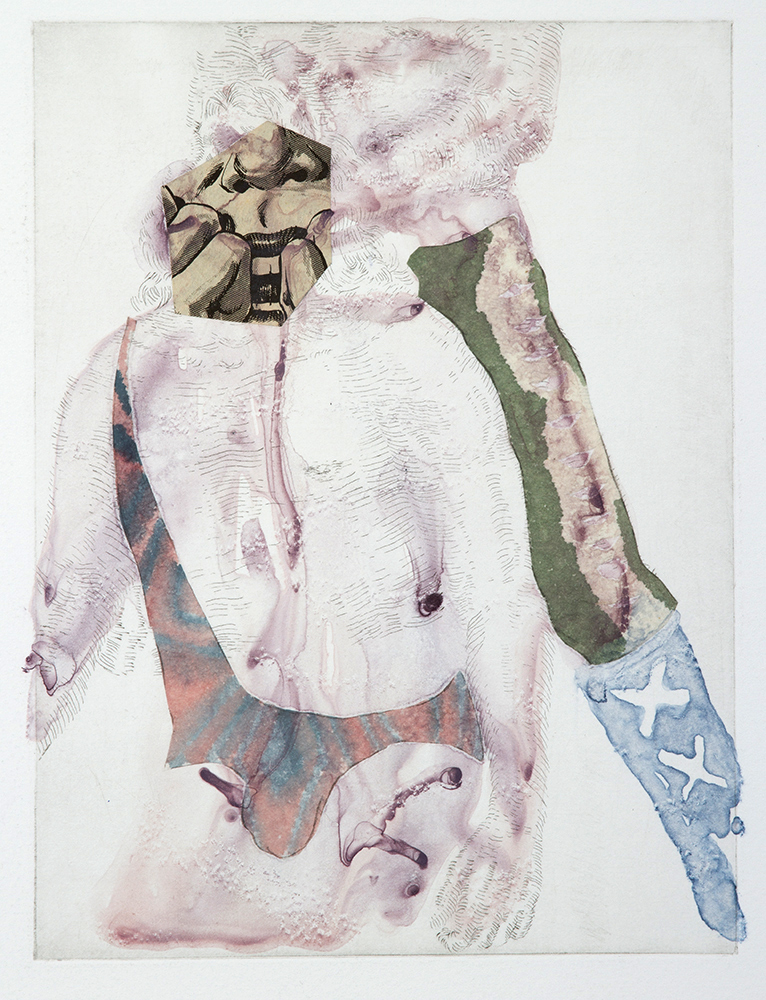 Klaus Gallery is pleased to present Refusing to Shake, an exhibition of monoprints and ceramics by Jared Buckhiester. In his first solo exhibition with the gallery, Buckhiester takes a more objective and fragmentary approach to his previously narrative representations of weary American masculinity.

Seven monoprints, each depicting a wrestling hold, are individually named after phrases drawn from Roland Barthes’ influential 1957 essay “The World of Wrestling.” In these pieces, Buckhiester begins with a found photograph whose outlines he transfers to a copper plate. Working with topographical precision, he then contours his figures’ details by eye and prints the resulting image. Watercolor bathing suits and snippets of Conan the Barbarian comics are affixed to the still-wet paper in a second pass, along with delicate pools of bloody watercolor.  Echoes of printed battlefields past, from Goya to Dix, ring through the equivocal optics of male desire.

Barthes’ close reading of matches reinterpreted the apparent rough-and-tumble of professional wrestling as a refined sign system. Similarly, Buckhiester’s addition of vintage collage elements to his lushly rendered gladiatorial figures breaks his pictures’ representational continuity, highlighting the subjects’ grounding in a world of colonialist propaganda and sublimated eroticism. However, there is an about face here, or maybe a double take. The works are not only late-breaking ideology critique; they are also reflections on the tenacious erotic hold of images about which we know better. For some gay men reared pre-Internet, like Buckhiester, images of men engaged in actual or performed violence become vessels of powerful feeling, potent and unshaken despite later “reeducation.” The artist writes: “The prints are a flaying of codes, revealing bone.”

Presented alongside the wrestling monoprints, Buckhiester’s ceramic sculptures also render, fragmentarily, figures of violence. Titled Urinal End and Urinal Private First Class, two figurative vessels – hybridizing Moche ceramics and truckers’ longhaul piss pots – don sculpted helmets, shoulder pads, and jockstraps. Their kneeling postures and submissive receptivity suggest that violence and waste are persistent, trans-historical forces. Buckhiester describes their energy as “both transgression and atonement.” Again, these epic themes are refracted through the medium of a very specific erotic fetishism, rendered just so. After the title of the exhibition’s third sculpture – a large bisqueware jackknife – one might ask of these brutally fragile works: what’s gone with that boy I wonder…