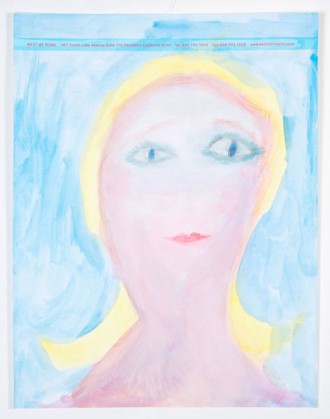 The compact spread of this nine-artist group show, inspired by a bicoastal “Bad Girls” exhibition organized by Marcia Tanner and Marcia Tucker in 1994, manages to suggest both the diversity of the conversations currently taking place about the experience of being a woman and the need, unfortunately almost as urgent now as it was 20 or even 50 years ago, for those conversations to be louder. Ridykeulous’ The Advantages of Being a Lesbian Woman Artist is a screenprint of an emendation of the famous Guerilla Girls poster, at once blunter and more nuanced (or less transparent) than the original; Xaviera Simmons’ 40-by-50-inch Untitled (Red) color photo, just as straightforwardly elliptical, shows the artist on a striped rug in solitary flagrante delicto; Vaginal Davis’ Untitled (Hag) is twelve watercolor pencil, glycerin, tempera, makeup, and food coloring portrait busts, disturbingly schematic but surprisingly distinct and expressive, of petite blonds and brunettes painted on stationery from universities where Ms. Davis has performed; and Alice Mackler’s killer drawing and ceramic figurine both just tell it like it is, whatever “it” is. Ann Hirsch’s video Here for You (Or My Brief Love Affair with Frank Maresca), an awkwardly edited supercut of the artist’s appearances on a D-list reality show, from her insanely ridiculous audition tape to her dismissal by the titular creep, sounds out the double-key coding of irony—that people who don’t get it simply won’t get it—while also paying due attention to the uncomfortable fact that even within repulsive exploitation and seedy display there may be genuine human feelings.