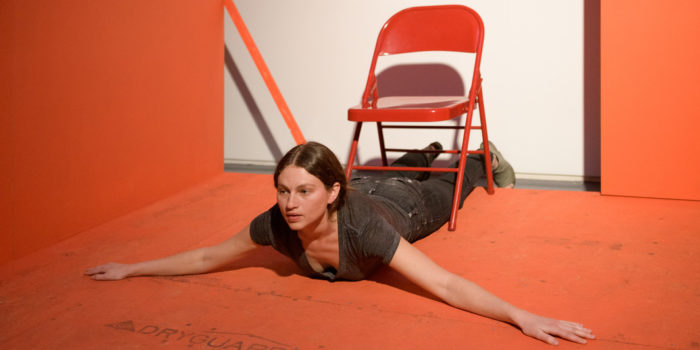 PRIVATE COLLECTION is a phrase charged by museum tombstones, which display information about an artwork that is otherwise inaccessible to anyone beyond the “private” owner. It connotes a kind of exclusivity, a proprietary right to viewership, a generosity in extending that privilege to the viewer. The term also echoes private recollection, memories and personal experiences replaying in fragmented form. As the title of Lauren Bakst’s recent performance at Klaus von Nichtssagend Gallery, the phrase and all of its associations formed a framework for something that, as Bakst declared, was “not a performance” and “not a dance” either, choreographed by an artist interested in challenging the complexities of “the live.” Sifting through past experiences, movements, conversations, and performances, Private Collectionwove real and fabricated histories into rehearsal-like re-enactments in the present.

The evening began at 6 PM, when the two dancers (Chanterelle Menashe Ribes and Bakst) could be overheard talking to each other in another room of the gallery separated by long hallway from the larger space, where the audience sat on folding red metal chairs before an L-shaped plywood stage designed by Yuri Masnyj. Some twenty minutes later, Ribes came into view, edging into the hallway by sliding along the wall as if rock climbing across a horizontal face. Although this was her entrance, it was not the beginning, for the three parts of Bakst’s performance were staggered and shuffled in a predetermined order: Part three was followed by part one, then parts two and three, then part one again, and finally part two. Segues were not clearly marked. The performers might begin to change clothes, a chair might be moved, or the lights might flicker, but these signals were interspersed with other false starts: Ribes or Bakst miming cigarette breaks; Ribes calling out “Lauren? … Lauren, could you… go back to the beginning?”; Bakst feigning defeat (“I forgot what came next. Shit. I’m going to start over, okay?”). All of this triggered not a replay of past actions, but a new constellation of movements. I was reminded of a concept Bakst had been working through over the past few years: “There are an infinite number of ways to get down and get back up again.” Here, repetitions were not failures but trials, reenacted so as to become recognizable by the audience and therefore significant for their invocation, formation, and embodiment of memory—as well as its imperfection. As Ribes slid closer to the first row of folding chairs, her breathing became audible, an indication of the exertion required to maintain her position hugging the wall. She then abruptly broke her focus to approach a man in the audience—a friend?—and whisper something in his ear. The man stood up and walked down the hallway toward the smaller room as Ribes returned to her task, edging closer to other seated people. This sequence repeated twice, three times, with two or three people sometimes leaving their seats at once. The intimate gesture, a whisper into an ear cupped by her hand, was tainted by its simultaneous exclusivity.

It soon became clear from the sounds in the other room that Bakst had also “begun” performing and was now being watched by those chosen few—a “private collection” of people chosen by Ribes. Meanwhile, Ribes’s whispers escalated into public calls: “There’s a girl who’s taking notes—are you still there? There’s a performance going on in the other room. Take someone behind you and go watch it.” Her final invitation could be heard from the smaller room: “I don’t know if you heard, but there’s a performance going on in there. I think you should go watch it.”

Over the course of the evening, Bakst and Ribes’s movements ranged from ballet arm positions and heel-shuffling dances to slouches in chairs and masturbatory gestures frankly enacted under a shirt, or in sweatpants. Throughout part three, Bakst often commented, “This is the choreography,” as if to pretend that each twitch of her foot or extension of her arm might have been read as a tic or not a dance were it not for her clarification. Some of the show’s segments were apparently “stolen” from other performances, or sourced and recombined from both performers’ memories; an earlier iteration of Private Collection was described as a “personally-motivated performance-archive,” and several of the recurring phrases elicited chuckles of recognition from Bakst’s friends—a more candid tug at exclusivity. (“That’s a family joke,” Ribes explains during a monologue in part two.) One particular sequence looped: a slow, silent movement punctuated by a monologue. Bakst’s skill as a writer came through in these sly and seemingly offhanded comments on sex, self, and performance, and how all three are intertwined. In part one, Ribes sits in a twisted Sphinx-like position on the floor and tells a story about an intimate partner named Mal whose obsession with animated porn is interfering with their sex life such that he seems unable to grasp the fact that Ribes “might actually be there.” Later, another story about Mal is recalled from a group therapy session, a context in which the self is necessarily performing and exchanging mindsets with others. In part two, Ribes begins a speech from a spotlighted chair: “My name is Lauren, L-A-U-R-E-N, but today I’m speaking to you as Laurin, L-A-U-R-I-N. That way there’s this kind of fictional gap between me, and me, and you.” Midway through, Bakst relayed an anecdote about an event at which she performed in place of Ribes, and how friends had approached her after the piece ended to say that they actually believed she might be Ribes.

Returning to the framework of Private Collection, these jostling personal narratives voiced by two different people pointed to the self as an accumulation of selves, the interior life as complex terrain. A quote attributed to “Laurin:” “I’m not a martyr. But I’ve been so choreographed and coded that it’s hard to know when I’m speaking, if it’s really me or someone, something else.” With its loose timestamps and recursive structures, the performance as a whole took aim at the questions of live-ness most closely tied to the “self:” Who is it a performance of, and for whom is it performed?

Private Collection was performed on May 11th and May 12th at Klaus von Nichtssagend Gallery in New York City.