15 Group Shows Not to Miss: Art Exhibitions From Chelsea to the Lower East Side 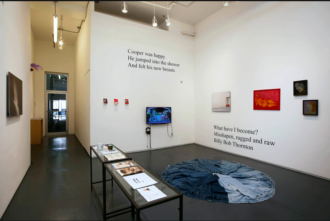 An installation view of “Thanks to Apple, Amazon and the Mall,” Hiroko Masuike/The New York Times

Group shows are a staple of the New York gallery scene, but right now they are not only more plentiful than usual, they are especially good. The 15 group shows reviewed or mentioned here form a welcome antidote to the deluge of monolithic, big-name, single-artist shows that have drawn most of the air in the art world over the last year. They take us to a place where money is not king and give us small snapshots from the gigantic disorderly sprawl that is contemporary art. These shows often represent dealers, their gallery directors or invited curators — usually artists or critics — thinking slightly or very outside the box, putting together disparate works often by younger or lesser-known artists, in new and illuminating combinations. The dizzying bounty here reveals not only the elastic nature of the words “art” and “artist” but also of the group-show format itself.

ARTISTIC DISSONANCE
If there is a group-show look at the moment, it is one of emphatic diversity in which nearly every work on view seems to be in a different, not necessarily identifiable medium. The Lower East Side harbors several worthwhile iterations . . .

The most provocative example of the dissonant group show is “Thanks to Apple, Amazon and the Mall” at Klaus von Nichtssagend Gallery (54 Ludlow Street, through Feb. 8), which expands our sense of the gallery’s activities by celebrating the line of artists’ e-books it started publishing in 2013. All nine of the writers, artists and filmmakers who created them are represented in this highly diverse presentation. The series has been edited by Brian Droitcour, a freelance critic and an editor at Art in America who also helped organize the show.

Another standout in the show at von Nichtssagend is James Duesing’s “End of Code,” a droll, 15-minute computer animation in which fantastical semihuman creatures deliver deadpan non sequiturs, wisecracks and aphorisms while deciphering the code that controls both traffic lights and society. Whatever the future may bring, it seems to say, it is likely to be disorderly, but it could also be very funny.