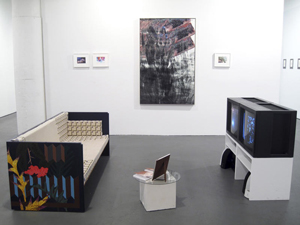 There’s the party and then there’s the day after—eating leftovers and talking about the party with friends who couldn’t make it. 179 Canal/Anyways has a little of that next-day feel. Margaret Lee organized 179 Canal/Anyways at White Columns as a “non-retrospective” look at 179 Canal, a collaborative wellspring of art invention she nurtured during a 15-month span starting in March 2009. There, spurred by an “open and continuous” dialogue, she and 75 of her friends and peers put on exhibitions and performances. By relocating 179 Canal to White Columns, the conversation, it would appear, is over. We’re getting the “he said/she said” recounting, but the real action is on hold. Lee initiated 179 Canal out of exasperation with established art ideas and institutions. White Columns isn’t a commercial art gallery, but there is an institutional whiff to this new context and temporary home for Lee’s inspirational energies.

The exhibition resists taking itself too seriously, a key to the aesthetic of the original 179 Canal, yet strives to be a serious endeavor for its White Columns audience. It wants to be funny, engaging, and playfully transgressive, while earnestly conveying what it must have been like to share in the aesthetic dialogue between the project’s participants. Consider Antoine Catala’s video assemblage “Tro-pea-cal Escape” as emblematic of Lee’s intentions. With a mash-up of high- and low-tech materials, Catala has mounted a wide-screen, high definition monitor, showing slick, colorful footage of breaking surf and sandy beaches, chest high on a steel pole. Jauntily attached to the screen in various ways is a perky plastic awards trophy engraved with “ ____phy,” an actual green pea on a little Styrofoam ledge, and a spiral bound paper desk calendar dangling on a vector of string. Get it? It works much better than the depressing nature videos you endure in dentists’ waiting rooms; solving the silly pictogram puzzle distracts with levity. Et voilà, a brief Caribbean vacation from your problems.

Underscoring Lee’s art nesting instincts, the spare installation of 179 Canal/Anyways has many of the homey components of a studio apartment, decorated with palette and materials from Pottery Barn Teen for Girls. She has arranged paintings, photographs, sculptures, and assemblages by a sampling of her network’s artists using black and white accents to unify high-keyed colors, most frequently cerulean blue and powder pink. Like family photos, 11 of Lee’s small photographs in white frames dot the exhibition, documenting works from various 179 Canal projects. Placed at the center of the exhibition—its living room—is Graham Anderson and Caitlin Keogh’s decorative platform divan and pillow, from which viewers can watch three video projects on twin television monitors. Reinforcing the idea of the television-as-hearth and our home’s emotional center, the suite of videos is the show’s most rewarding work, especially Yemenwed’s mesmerizing “Woman merges w Car,” in which three women, filmed in orbs of light, rhythmically mime everyday gestures. Within reach are copies of the uniquely punctuated, stream of conscious art novel Volume I: Gout, written by the mysterious K. Mustermann for the exhibition. Liberally footnoted with Web addresses, it’s ready for publication on iPad.

Beyond the divan are references to bedroom activities: from overhead, languidly dripping down the wall, “Bait N Gate,” a white sculpture, made of zippers and puddles of urethane by Andrei Koschmieder, suggests a fickle seduction. Trevor Shimizu’s painting, “Girlfriend Wants a Baby,” conjures both the weight and delight of such a desire. In what might be considered the kitchen/dining room area is a floor piece made of potato chips warming over a light table, and a microwave-based sculpture, both by Anicka Yi. Alongside them, a wry reference to the social base at the heart of 179 Canal, is Michael Caputo’s “69% accurate (what a rip off!),” a freestanding reproduction of an exhibitionist’s logic tree charting artist Terence Koh’s social connections. The question might be “Who’s coming to dinner?” or “Who’s invited to the party?” It brings to mind Paper Monument’s how-to publication for aspiring artists, “I like your work: art and etiquette,” full of more subtle dos and don’ts for the self-promoter. Its emphasis on not looking like you’re trying seems aligned with the nature of Lee’s art network.

Lee made an art family and an art home for herself. A home is where we live in the deepest sense. It is where our thoughts settle, where we can accept change. The original 179 Canal project space is no longer home to the art project. The White Columns’ exhibition-as-home version is uninhabited: the only people here are visitors to the exhibition. And that’s what makes this exhibition a facsimile of the original. It lacks the original’s life, the energy that comes from a dialogue in process rather than an excerpt of a completed dialogue. 179 Canal/Anyways does just avoid becoming a requiem for an alternative art space: visitors are welcome to come in, put their feet up, and make themselves at home. While it may only serve as a model home, it does work as a reminder to be sure to make your own home for your art, a home where you can create new contexts and question institutions and, in so doing, urge others to do the same.