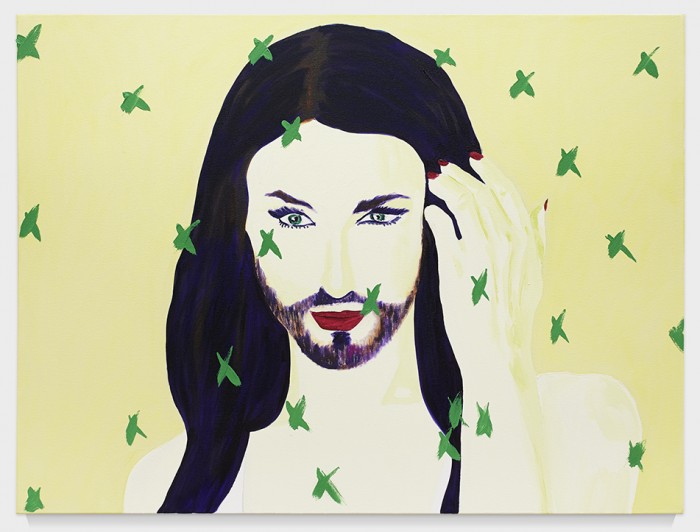 Disconnected, Disastrous, Displacement, Disillusionment—many of the titles of Thomas Lawson’s new paintings begin with the prefix dis-. Together, they denote a realm of negation, reversal, removal, and intensification, pulling imagery from common media sources to address questions of attraction and desire that the well-known Los Angeles–based artist discusses below. An exhibition of these uncanny works will run at New York’s Klaus von Nichtssagend Gallery from September 12 to October 18, 2015.

THE SPOOKINESS of representational art always attracts me—pictures that cast a spell on the unwary. I’m interested in various kinds of dislocation and disorientation, a visual disabling that makes people pause to reconsider what they are looking at.

I begin any new series of paintings by collecting images that share a theme or a look. My sources have always been kind of the same: newspapers, magazines, mass media of all sorts, as well as more esoteric art worlds. I love mining the lesser-known byways of art history. I’m interested in what’s already circulating in the collective unconscious, and trying to make some sense of that at any given moment. Typically I’ll see something that strikes a chord and I’ll clip it, download it, or whatever needs to be done to it, and then I’ll pin it on a wall. A few other pictures will gather around it and then they begin to migrate into a folder, and then back to the wall, and finally into drawings and paintings.

I began this series of paintings by gathering images that telegraphed an idea of distress. As the pictures started to stack up, I noticed an affinity for words beginning with “dis-”—maybe I was in a state of distraction. At a certain point I began digging into the dictionary and was particularly happy to discover that the etymology of the word disaster is rooted in astrum, the Latin for “star,” and that Shakespeare’s star-crossed lovers were a disaster waiting to happen. The idea that an overused, common word has such a rich context, with hints of astrology and fate, is fabulous. It gave me a bit more of a leg up in thinking about the titles and that in turn fed into helping to edit the pictures.

Displacement uses an image of Conchita Wurst performing a gesture that signals vanity, pulling back a veil of hair in a self-conscious preening for the camera—which is what’s attractive about the picture, I suppose. The idea of the painting then becomes a series of explorations of the reveal, of what is shown and what is displaced. Issues of gender have been in the zeitgeist for a while now and emerge as an aspect in these paintings, playing into the shifting uncertainties that I’ve always thought about regarding representation—how we present to the public, and how we make a face. In Dislocation the starting point was the mask-like face of the Butoh dancer Kazuo Ohno, which allowed me to delve into questions that are also pertinent to formal issues, such as the basic problem of beauty and how it’s framed—how attraction, desire, and ugliness play out, and how they relate to notions of imperfection and perfection. I think paint is a particularly rich medium for investigating these kinds of things. As you are painting, you are making incremental decisions that move in a counterclockwise way to the initial idea. There is always a curious back and forth between intentionality and execution.

These paintings are modest in scale, but the faces and hands are large and a little threatening. Many of the faces are larger than life, and often there is a tension between them and the hands. In a painting likeDisembodiment it may not even be clear to whom these hands belong; they could be coming in from somewhere else in the larger scheme of things—the internal spatial logic of that painting is very hard to read. Throughout, a sense of disarticulation is built into each painting’s formal structure. -as told to Lauren O’Neill-Butler