“Weird gifts get handed to me. There is an infinite field of possibility.” - Mark McKnight.

Photography is overwhelming because the world exists in exponential realities. The world is in my head and your head at the same time. Never the same, but it can be collaborative.

Something different shifts inside the grey mass of Mark McKnight’s head. Bodies with bellies and hairs.

A swamp of emotive blacks and whites. Grass and fields for f-cking, or frolicking, or finding something lost. I’m at a loss to describe how good these photos are, although I’ve never laid such a blatant claim so publicly in writing for an individual. His photos are full of opposites. The grotesque feeds the beautiful. Together is better; they are shared and stronger as a couple. Confusing maybe, but to see the results in the frames of McKnight’s solo show In This Temporarily Prevailing Landscape at Klaus von Nichtssagend is full and baffling. 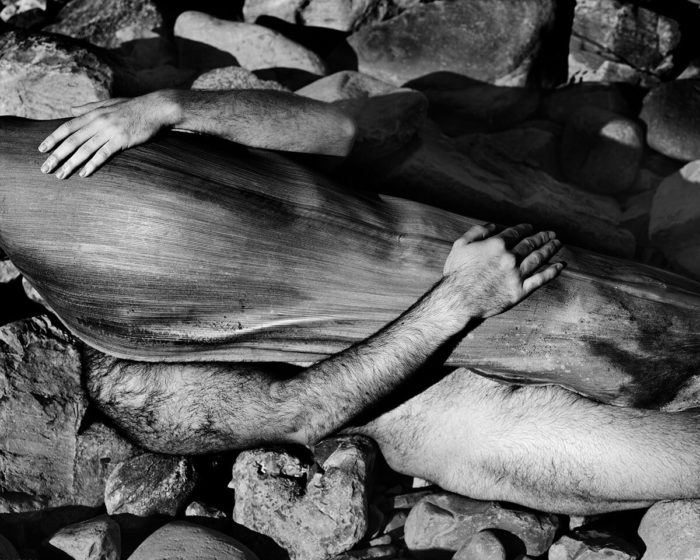 McKnight’s images are less tender than they are renewed and imposing. That’s not to say they are removed from affection, intimacy, or are in some way intimidating. Sometimes it just takes the excitement of stepping back from routine and accepting a smile from just the right stranger to see something underappreciated in a completely new way. Mysteries will gratify. Magic will sink its teeth into your veins, let those knives stick. A landscape is filled with fists of dirt and the legs of trees beaten by the sun and climate.

McKnight builds into this land a space for a familiar body. The tones of certain shapes escape trusted realities. He transforms bodies into landscapes - an Ansel Adams, perhaps. You can see Adams’ unimaginably balanced frames of Yosemite mixed with the impossibility of abstraction and existentialism of post-war painting. Together with these and other influences, he lays claim to great histories, tethering in his own views of gender, sexuality, and authenticity.

A body desires entropy. It marches toward it regardless of fear. Take its embrace, you will float in it. How do we escape our bodies? Maybe too quickly, but not before rich and lengthy periods of reciprocity. In that regard, McKnight’s work is, as Garth Greenwell suggests, “mimetic of a particular experience of desire, a continually frustrating seduction.” Mortality is strikingly like that. Pain and pleasures are as transcendent in the work as they are in life.

What comes from standing and seeing McKnight’s pictures is that we as individuals are capable of transforming into something slight, something greater, something round – something heard. The emotive isn’t to be doubted; it’s to be professed and empowered. McKnight gives the pathetic its rightful celebration. Queerness is no longer confined to the definitive lines that engorge the celebrity and society of its politics. It is stronger and greater than any one specific group or person. Together people can come to McKnight’s works and feel the embrace of the bizarre that we all possess.

Stand a while. We’ll celebrate you

Mark McKnight: In this temporarily prevailing landscape is on view at New York City’s Klaus Von Nichstssagend Gallery through Feb 16, 2020.