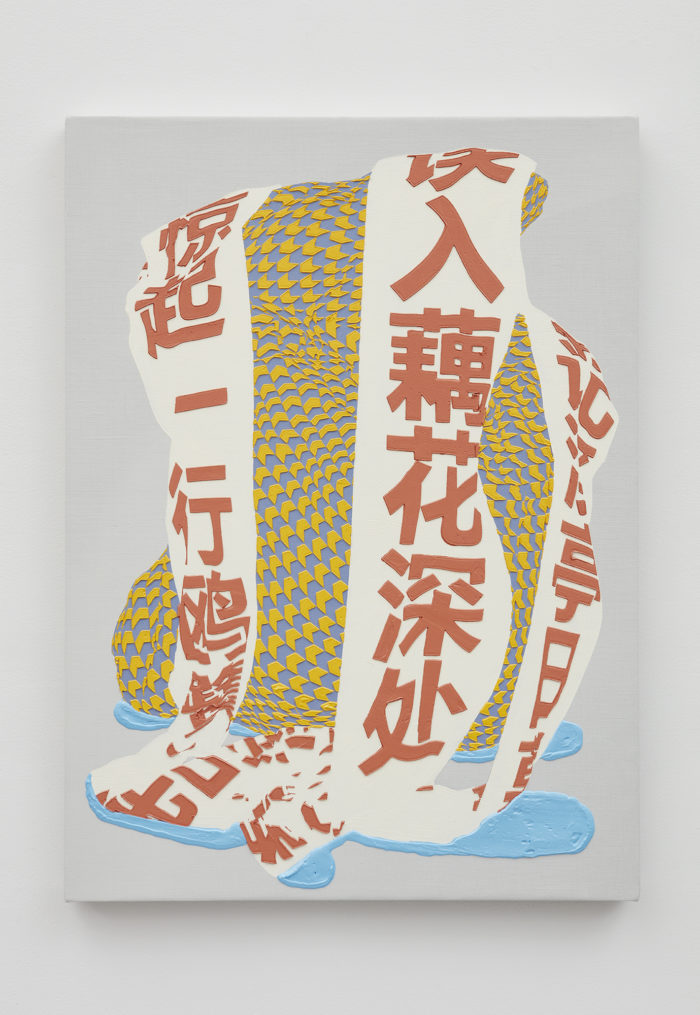 On the last hot day of summer, in the little yard I share with my neighbor, a stray cat crawled under a blue tarp to get some shade. I watched how the bright blue plastic, rising and falling with the cat’s slight breath, enveloped and articulated its body. All but two of the paintings in Alex Dodge’s show here depict textiles that shroud and define nondescript forms in a similar manner. The patterned textiles delineate the bulky objects they cover by way of their undulating contours and foreshortened patterns.

The paint handling is hard-edged but as sumptuously thick as fondant icing. Dodge achieves this effect by pushing oil paint through laser-cut stencils, a trick that nods to the centuries-old Japanese textile-printing practice of katazome. Atop the Op art–like fabrics usually rest banners of text that serve as another opportunity to flex the physics of the picture plane while offering up moments of earnest emotional receptivity. In Like a Dream (Li Qingzhao), 2018, a banner with a poem by the titular Chinese poet, written almost a millennium ago, is draped over something blanketed by a cloth with yellow and blue chevrons. The characters—which also function as figures of unearthly beauty—translate to “I always remember the sunset / over the pavilion by the river. / So tipsy, we could not find our way home. // Our interest exhausted, the evening late, / we tried to turn the boat homeward. / By mistake, we entered deep within the lotus bed. / Row! Row the boat! / A flock of herons, frightened, / suddenly flew skyward.” Most of the texts in the show were found, though some of them are Dodge’s own writing. The quietude of Li’s language, its insistence that one can simply end on an image, is right at home in the heartfelt world of these paintings. It brings me back to that blue tarp, and how it flattened as the cat ran away.