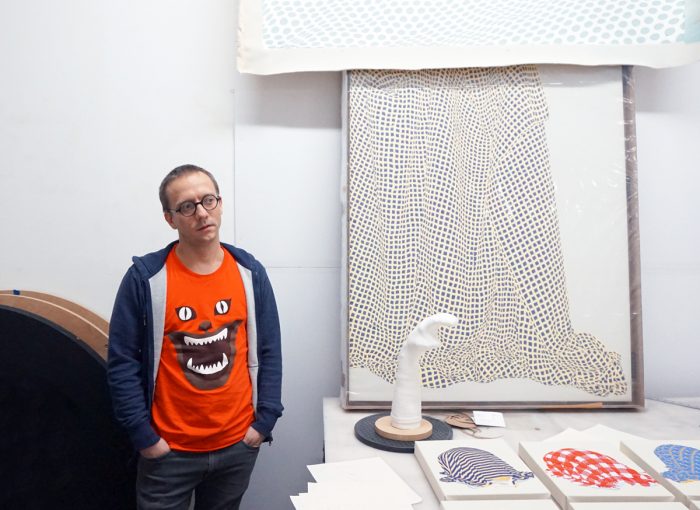 This week’s studio: Alex Dodge; East Williamsburg, New York. Alex Dodge‘s work explores the relationship between humans and technology, and his studio is, fittingly, filled with both analog and digital tools—3-D scanners and computers with animation software, but also oil paint and traditional hand-cut stencils. “On one hand, I love materials,” he told me. “I love to paint and I love very historical processes. But on the other hand, I have this real desire to understand how to reconcile the digital and the physical.”The Colorado-born, Brooklyn-based artist, 38, received his B.F.A. from RISD and then enrolled in the Interactive Telecommunications program at NYU, where he learned about coding and electronics, among other things. He is interested, he said, in how technology creates a “digital overlay on top of our experience.” Gesturing toward a series of graphic canvases depicting patterned fabric atop a plastic skull, he said, “The pattern is distorted around the object, and in a way I like to think about the pattern like a digital system—a repetitive system that’s sort of agnostic to everything around it.”Dodge is at work on a series of paintings using a figure he constructed that resembles a sock puppet. The series is also somewhat inspired by Ridley Scott’s Alien.”The Alien film has always been intriguing for me, in terms of what the alien represented,” Dodge said, noting that Scott took inspiration from Francis Bacon’s Three Studies for Figures at the Base of a Crucifixion.Dodge is currently preparing for a solo show in April at Klaus von Nichtssagend Gallery and has a three-month fellowship in Japan later in 2016. This will be Dodge’s 20th trip to the country. “I’m going to be working with traditional Japanese carpenters who build shrines and temples.” said Dodge. Below, he shows us around his studio.

In-progress works depicting fabric over a skull. Dodge uses a 3-D scanner to get a rendering of the general form of an object. “Then I’ll use a program like 3-D Studio to simulate fabric, drape it over an object, and apply my own physics and gravity to it,” he said. “That’s how the initial structures are made, then I can start putting patterns on them.”

“I felt like I was back in freshman foundations,” Dodge said, about a sock puppet model he crafted from an armature, wire, and tape. He’s currently working on a series of paintings that incorporate the sock puppet as forms which explore themes from Ridley Scott’s Alien.

3-D scans of the sock puppet figure that Dodge created using a Microsoft Kinect 3-D Scanner. “It’s a really cheap 3-D scanner,” he said, “which is actually a really good way for me to work because I don’t need the scan to be super detailed.”

Dodge originally thought he wanted to go into Marine Biology. This piece depicts a beached whale. He described his workflow for producing paintings as “convoluted.” “You start with this real-world idea of an object but then this whole thing is constructed, simulated in a computer, and turned into a 2-D pattern,” he said. “I’ll cut a stencil from there and then scrape lots and lots of paint onto the canvas. It’s a lot of steps to get there.”

Dodge uses stencils to achieve complex images and as a way to manipulate patterns and space quickly. A lot of his work is inspired by Katazome, the traditional Japanese textile printing technique. “The stencils by themselves can be super intricate and amazingly beautiful,” he said. “They put them on top of the textile, scrape rice paste through it (which acts as a resist to the dye) and then later wash off the paste. I’ve watched people do it, and I wanted to try it with paint.”

“I wrote a program that generates millions of unique contiguous shapes called Polyominoes. These were lasercut from plastic and then put into a tumbler with an aggregate that causes the pieces to stick together. I let the tumbler run for 30-plus hours during which the structures combine on their own to form the tiny sculptures.”

An “Eye-Tracker” that Dodge built, sitting on a plastic skull. “There are infrared LEDs in there,” he said. “Basically, you put this on, and it turns the dark part of your eye into a white dot that the computer vision program can track very easily. It lets the computer know if you have a camera facing the other way, or if you’re looking at a screen. I had a kind of silly idea, but it’s something I started to make drawings with. It involves looking at a blank wall or blank screen and imagining what’s there. And then trying to draw it with your eyes.”

Tools that Dodge made to scrape paint on his canvasses. “They kind of look like pastry tools or something,” he said. “I wanted to make something with a little bend that could put pressure on in the right way.”