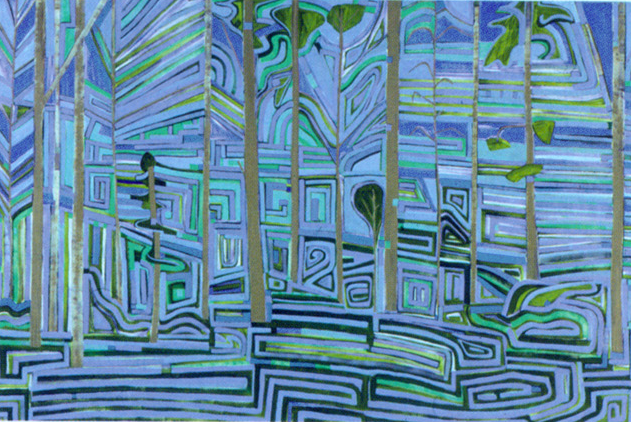 In his third solo at Team Gallery, Benjamin Butler, who resides in New York and New Haven, showed five drawings and 10 paintings, two of which lay parallel to the floor on low platforms (all works 2004 and 2005). Butler’s last exhibition at Team featured renderings of individual trees against rhythmic backgrounds of short, piled-up strokes of pulsating colors; the abstract particularity of the trees called to mind early Mondrian paintings. Butler’s more recent works feature larger groupings of trees and other elements, likewise embedded in fields of color.

In three of the paintings (Trees in the Forest, Orange-Yellow Autumn Forest and Green Tree Pink), picture planes are broken up by overlapping branches and broad vertical brushstrokes of background color that mingle with those of the trunks. The canvas shimmers in differentiated values. Trees in the Forest departs somewhat from the others in its emphasis on the verticality of a dozen or so slender trees. The interstices of trunks and branches and a small area of foreground are rendered in mostly horizontal striations of color, evoking an enchanted woodland at twilight; open space undulates between the trees, at moments appearing to reach beck, at others to swing forward. Pale trunks in Seven Trees in a Dark Forest bracket the composition, while the wide gulf between is filled with geometric, hard-edge spirals, horizontal bars and gently curving tunnels. These form paths into the landscape, rendered mysterious in deep indigo and dark-hued and glimmering greens and black.

Other paintings are less dense. In Four Trees Pink Leaves, the view is dappled with mosaic-like color. The two paintings on platforms, Field of Flowers #1 and #2, are green fields with pink rounds of color resembling Dots candies. Two smaller views, Forest Interior and Through Four Trees, give the impression of being seen through a window of a moving car, implied by snapshot framing and strokes of overlapping greens and wide colored bands that narrow to a low distant horizon.

Visual dense, the five untitled graphite drawings adhere to the landscape theme. Stacked lines, fragile but assured, trace the progression of sky, mountain and trees, covering the entire sheet. As conveyed through the direction and spacing of these lines, the drawings effectively transmit the calm faceted mountain, lazy clouds passing in the sky and vibrations created by the spiky profiles of pine trees.