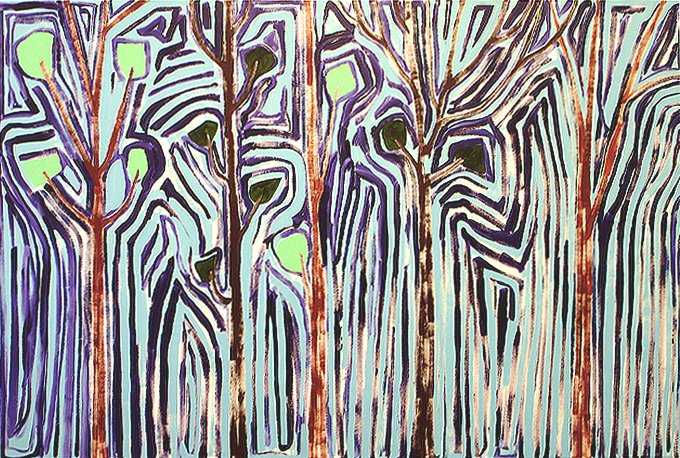 In his first solo exhibition at Karyn Lovegrove Gallery, painter Benjamin Butler exploited to the hilt the sometimes surprising range of color found in nature. With the exception of Field of Flowers (all works 2005), every painting here depicts trees, and Butler's unapologetically singleminded focus signals a relationship to his subject that is both personal and profound. At first glance, Butler's simplistic forms and restricted subject matter might suggest a lack of substance, but a little more time spent with his paintings reveals a deeper complexity. There are nods, for example, to Impressionism, Color Field painting, and psychedelia. The disparate influences of Gustav Klimt, Milton Avery, and Frank Stella are also apparent. And though his palette is strikingly different from theirs, Butler shares Maureen Gallace's steadfast pursuit of a single subject and the sunny flatness of Alex Katz.What makes Butler's work so impressive is the range of styles and approaches that he employs, and the ways in which his representations of the external world are enhanced through a Walden-esque internalization of nature. In Five Trees, Twelve Leaves (Purple), the artist surrounds skeletal trees with deep purple and light blue outlines and fills the background with dizzying stripes. In Untitled Tree (Blue, Violet, Green), simple shapes and large blocks of color take priority over convoluted pattern. Thus each work uses a different means to encourage the same meditative way of looking. In 18 Trees in an Autumn Forest, Butler combines Klimt-like dots and squares of foliage with stark brown trunks that chop up the picture plane, while the ground is made up of an expanse of swirls that give it the appearance of a geological map gone awry. Blue-Green Forest is equally effective, its woozy green lawn and pale birchlike trees seeming to drift in and out of focus against the aqua sky as though seen through a heat haze. In Three Trees (Blue, Violet, Pink, Green), Easter-egg pastels mark out a zigzag road or river while the trees and sky are built from large areas of blue and gray that suggest a stained-glass window.
Lying face up on a plinth in the center of the gallery, Field of Flowers #3 grounds the show figuratively and literally. An expanse of bright green dotted with pink, yellow, and orange, it represents a meadow seen from above. The fluorescent intensity of the color feels artificial at first, but it isn't so different from that found on, say, Death Valley hillsides in the spring. The contrast provided by the gallery's white floor brought these colors vividly to life, and the well-designed hang allowed each painting to breathe while still participating in a dialogue with its neighbors.

The enchantment of Butler's project, then, derives from his mastery of color combined with the set of painterly techniques that he has carefully compiled and that he uses to convey a heartfelt feeling of kinship with the forest. His trees seem to possess a mystic Tolkenian wisdom, and the openness with which this idea is presented allows the work to remain fresh--even uplifting.