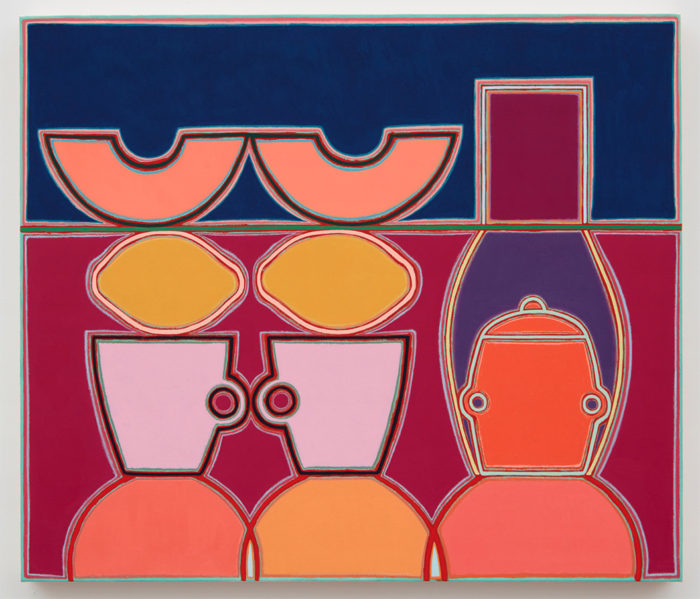 Still life is a time-worn but hardly vigorous genre at the moment, but Athens, Georgia-based painter Holly Coulis has been inventively tweaking its terms, and never more so than in these new playful and precise works. Eleven oils on creamy white linen on 1 1/2 inch deep stretchers fill the two main rooms of the gallery, with five small gouaches on paper in a connecting hallway. They deny established settings for the objects and foodstuffs that populate her painted worlds: horizons have been elided and often the pleasant challenge is to work out the dynamic of the table, which has become less and less at odds with the flat verticality of the canvases.

Like Cézanne, Coulis sees forms from a mobile perspective: the painter in front of the object becomes as ambulatory as the viewer can be in front of the painting. The result is a charged kind of reality, away from the fixity of the Euclidean tradition of Heda and Chardin and Manet. These “Table Studies” bear a flattening out of forms, an alternation between planarity and fullness so essential in Cézanne, Cubism, and Matisse. And Coulis adopts the Cubist gambit of working with mundane material: there are no skulls, stingrays, oysters, crystal goblets—the stock-in-trade of the Dutch Baroque. Her repertory company of forms includes common fruits, bowls, glasses, and dishes.

They are also inflected by Wayne Thiebaud’s edginess of color (his landscapes, more than the desserts), while employing hues with the panache of British color-field painters Michael Craig-Martin and Patrick Caulfield. Other artists they call to mind are from the period between the World Wars: Gerald Murphy’s (1888–1964) post-Cubist poster aesthetic, and the striking color shapes of the still underappreciated Purist movement in Paris (1918–22), in paintings by Amédée Ozenfant and Charles-Édouard Jeanneret (before he became known as Le Corbusier). Purism featured a similar splay of forms on surfaces, disregard for depth, mischievous overlapping of forms, and rigorous schemes of broad areas of unvariegated color. The Purists sought the new, celebrated modern material culture, and crafted self-contained worlds of existence—ideas Le Corbusier later pursued in architecture. This is reflected in the formal exactitude of Coulis’s Melon Slices and Pink Cups (2017), or in Pear Plant (2017) wherein the table is difficult to perceive, and the elements appear as if partly submerged in a half-full aquarium. There is a fine complexity of reflection/doubling and depth, which, as in pre-Renaissance paintings, reads up and down in space instead of forward and back. In Orange Row and Paper with Arc (2017), shadows cast by nine oranges, a melon, and an avocado imply a single light source, yet their unmodulated forms are fully illuminated: the picture is constantly in the position of negating itself.

The elements in Coulis’s paintings appear to be surrounded by radiating outlines, edged by glowing neon penumbrae—these have the effect of giving fruit, bowls, glasses, even potato chips a vibrational quality. Coulis layers colored shapes over larger colored shapes, producing fuzzy outlines reminiscent of the burr in drypoint etchings. This is in nice contrast to the broad areas of unvariegated colors that can stand for table or object. Coulis’s subjects are not erotic. They are not vanitas images. They are not naturalistic. Instead, they somehow propel you into an imaginative space of sign systems denoting some arcane language—Pale Table, Red Tumblers (2017) resembles pictographic charts, as if the objects enumerated are symbolic beyond their prosaic referents. She seems to be trying to communicate in a new way. There is something noble, in the political and meteorological maelstrom of 2017, in trying to create a bit of order.