In the Way of Stars

IN THE WAY OF STARS

WAYNE KOESTENBAUM ON THE ART OF DAVID GILBERT 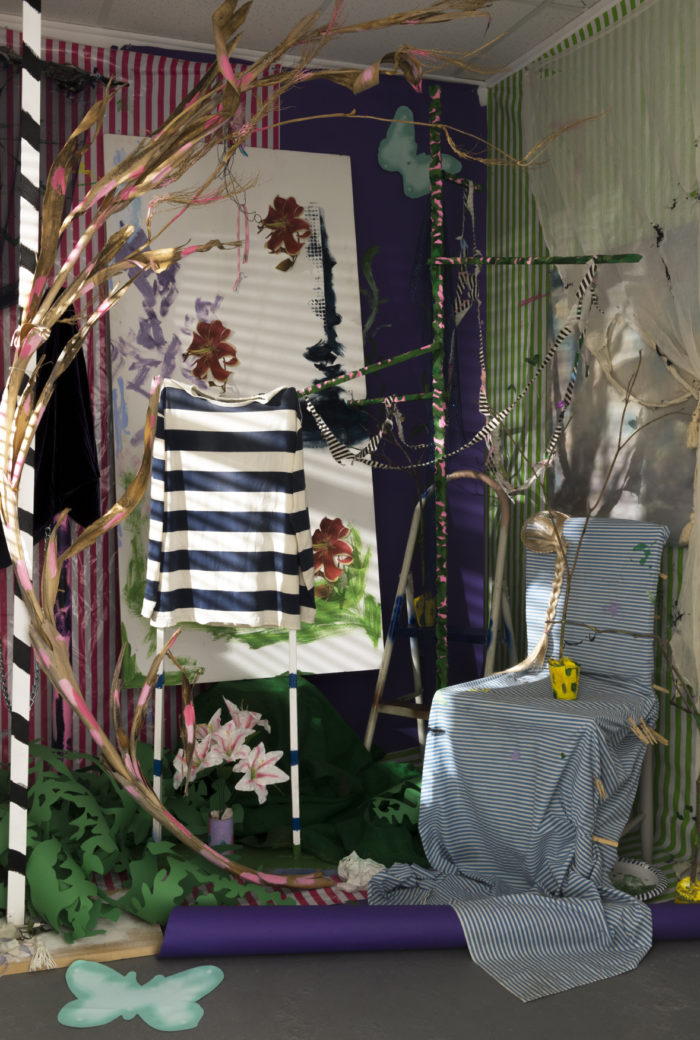 IF INGRES HAD PAINTED STILL LIFES while staying in Blanche DuBois’s ratty Chateau Marmont bungalow, they might have resembled David Gilbert’s delicately trompe l’oeil photographs of do-it-yourself, Judy-inflected domestic tableaux. Judy Garland almost appeared in “House & Garden,” Gilbert’s fourth solo show at Klaus von Nichtssagend Gallery in New York, but he wisely kept her offstage. She would have dominated. We needed, instead, to see what Judy left behind.

Or skip Judy altogether. As Ezra Pound said, at the beginning of The Cantos: “Lie quiet Divus.” Lie quiet, Judy.

Gilbert assembles fantasias in his studio, and then he photographs them. The space of and then—the annex, the ergo—is where art sneaks in. I hesitate to typecast Gilbert’s work by insisting on its LA-specificity. But who could mistake that light, a brightness fated to signify the star-factory’s wreckage—the signature Gilbertian lostness-ambience, the reedy “phallic symbol” bell-clarity opening up within coverts, the horizontally striped shirt like a warning buoy, the aquas and greens, the shadows and the Gena Rowlands–intense luminousness?

Gilbert lets art be little and big, disordered and pristine. He prints his photos cleanly. Doesn’t let mess into the photograph’s mise-en-scène. Makes the pictures yearningly large-format. But then, in the smaller of the gallery’s two rooms, he assembles a little cottage, a low-key Wunderkammer; in Gilbert’s modest extra room, the space of the afterthought or the forethought, we see, naked, materially there, the props he uses to compose his dramas. How small and paltry and lonely they seem, those actual fabric bodies, these sticks and scraps, apart from the sumptuous uses to which he puts them.

Can homo be abstract, is homo in fact primarily abstract, can homo be left out of the equation, must we insert homo into the argument, must we drag in the dreaded “tea and sympathy” vibe?

Keeping Josef Sudek happy, keeping the genre of glum transcendent object-on-table happy, keeping the thrift ethos happy, keeping sharp focus happy, keeping brushstroke happy: Gilbert keeps the members of the band happy by justly distributing his glee-oriented gaze onto every corner of the mini theater he cobbles together in his studio, or in the backyard adjacent to his studio, or in the imaginary space we conjure and call “David’s Theater.” His dream-compositions, snapshots of a release-from-confinement, offer a reprieve from needing to occupy any specific day or year on the homo-calendar or, for that matter, the MOMA art-historical time line. No, Gilbert doesn’t dance apart from all the chipper canons and movements buzzing around him like peer pressure and propaganda. But his jig, his born-in-a-trunk tatterdemalion’s vaudeville cart, driven by Aaron Siskind when he felt suddenly Mardi Gras, involves—like a ashback to Hush . . . Hush, Sweet Charlotte, itself a ashback to Lucia di Lammermoor—a wedding veil, a Brünnhilde wig, a rejected Shelley Winters Place in the Sun sob party, a host of lachrymose and “poor me” feelings transposed into a practical key, not unlike what a Martha Stewart or a Kay Thompson (“Think Pink!”) or other perfectly capable decorator type might do with her melancholy, which is to turn it into a proud product.

Nothing drearily commercial about Gilbert’s work: It is unostentatious, technically impeccable, and asymptotically allegorical image-production practiced within a haute mode dressed up as debris that, like the unassumingly monumental work of Tony Feher or B. Wurtz, reveals the architectural refinement of the nonce positions that a stick or shadow or plaster-of-Paris planter can take.

Gilbert freaks out our eye by putting paintings into his photographs—unfinished, loose paintings that look like fever stains, fabric scraps, decor sketches. And then he intensifies the freak-out by putting acrylic marks, sometimes, on the furniture itself—that is, on the cheapie odds and ends, the waste-objects intended to represent the factual, the indexical, the found. In your childhood too, perhaps, your heart fastened itself to a butterfly decal or a Christmas light or a hank of inter- woven plastic threads, like a hairnet or a Dobie pad. See Glow, 2018: The netting, whether scouring pad or industrial mesh, floating on top of a thick wooden rod and underneath a plastic butterfly, blossoms like a jellyfish or man-of-war, globularly wanting to attack you for loving it.

Photographers sometimes try to prove how popular they are, how many attractive and au courant friends they have. We viewers enjoy the braggart attestation and exhibitionistic generosity behind these encyclopedias of coterie portraiture. Gilbert, however, tries to demonstrate how alone he is—how surrounded by filigree, by reticulated absence, by the fronds and scars and ridges that arise, in a domestic setting, when solitude intensifies the eye’s power to differentiate details from the coagulated gloom.

Gilbert’s photographs have changed the way I see ordinary objects and the way I conceptualize the “population explosion” of cute junk and poignant detritus crowding my ambles—fantasy peregrinations as well as urban hikes. Position a minor object, his photographs tell us; tease the fabric near you into a hieratic flatness it didn’t know it was capable of. Let the bedsheet’s—dish towel’s?—wrinkles provocatively hang like cerements or a modesty shield, convincing you that exactly how you exist is OK in its disheveled plenitude, and that you don’t need to push (or iron) yourself toward something grander or more decided. All you need do is freeze the accident, not by beating it up but by sitting down and asking it to cooperate, to stop trembling. The accident—the photographed tableau—will reward you by going Ingres on you, or going Vermeer.

Going Judy? Three . . . two . . . one—gone. Stare long enough to outstay her apparition’s skittish wish to flee. The specter might not be Judy, might not be a star, might not even be a person. By calling the hypothesized figure who once lived in these photographed imaginary rooms “Judy,” I indulge in a private joke as large as this necropolis we call LA, or New York, or art tout court. So I call the imaginary resident of David’s Theater, this haunter, I call her Judy, because I know Gilbert was paying attention to her, as he was paying attention to Liz (of Boom! fame), as he was paying attention to the increasing rapture made possible by allowing his camera to investigate the folds of a room’s version of time unspent. He can see into the room’s wrinkles, its shadow-apertures, and make those corners and angles seem as intimate as an unsent message—too sentimental, too physical, too embarrassing. Pretend you’re going fishing, but you don’t have a fishing rod, and you don’t have a pond, and you don’t have bait, hook, tackle, or whatever the hell is required for fishing. And yet you are still going fishing, with all the plaintiveness of a photographer whose beat is the afterlife as it takes place now, in this studio, this room, among these bedclothes and paint stains and wigs and strings. Someone has just left this room, and now it has the look of a room too practical for anyone to imagine that the departed, tempestuous personage will ever return. No one is coming back to the David Gilbert Hotel, hostel for the irredeemable, for all the kids who think of themselves as plein air but are really phantom.

Cancel that interpretation. Instead, just notice how beautiful the tea-rose-pink hanging sheet is in Indoor Branch, 2018. Notice the faux planter’s impeccable yellow. Notice the vertical and horizontal stripes, playing chiasmus strip poker. Notice the tricky indistinguishability between atness and depth. Notice your sensation of being teased, lured into keener, more avid apprehension. Notice your sensation of standing in front of a shopwindow while longing for its captive merchandise. Notice your nearness to the dead. Notice how optimistic you suddenly feel about the future of staged photography, the future of assiduous, humble making. Notice how renascent is your own belief that an artist can be solitary and patient and careful, that an artist need not consult the sages or the whimperers. This artist, this David Gilbert, looks within, and the within he consults is a Rolodex twirling with playground specters. I’m now one of those specters, because I’m writing about the photographs, and because I’m trying to invest them, to drape them, with a kind of language that the poet Friederike Mayröcker has called zarte Prosa, “tender prose”—only as tender as these photographs, these archival ink-jet skeins, solicitations into a new quickness I want forever to be the property of every eye.