Skip to content
Back to Benjamin Butler Back to Glen Baldridge 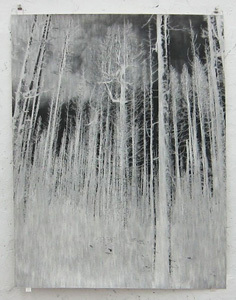 Held on the evening a vicious storm whipped through New York City, spawning the notorious tornado that felled countless trees in its path, the opening reception for Leafless was eerily timed. This autumn flavored exhibition pairs two artists who turn to trees as subject matter. One artist, Benjamin Butler, dedicates his entire body of work to compositional investigations of the tree form, while the other, Glen Baldridge, uses depictions of trees as one of many tropes contributing to an accumulating conceptual psyche. While we have one focus on form and aesthetics, and the other on expression of spirit or concept, each artist does a fair amount of both.

For Benjamin Butler, the tree is used as a modest framework for creating abstract paintings – his work references traditions of landscape paintings as well as sentimental attachment to nature, but more so they are about composition, design, paint, and color. There is a feeling of nostalgia, especially in his large paintings which at moments are wildly sprouted medieval tapestries giving way to abstract expressionism. What starts from leaves or branches turns into elaborate abstract puzzles, broken down shapes of stripes and strokes butting up against each other, the positive and negative vibrating off of one another. While the large paintings are curvy and wild explorations of brushstroke and pattern and light, the small canvases are contained, geometric and controlled, the colors solid and concentrated: the bare limbs of the tree are simple straight lines used as a device to section off the composition.

Glen Baldridge created this series of stark, ghostly images by screenprinting black and white photos of burnt forests or otherwise blighted trees over graphite covered paper, and erasing areas of the photograph away to leave negative images. These depictions are sinister, recalling a dark, apocalyptic heavy metal or death metal aesthetic, and yet they manage to be subtle, beautiful in fact. These are part of a larger body of work that varies in format and subject and expresses an ethos of angsty middle-American adolescence with biting wit, wrapped up in frustration with the establishment, struggles with mainstream culture, and in this case, humanity’s rampant destruction of nature. Concurrently, ‘Zig-zag: Works on Paper,’ provides the context of Baldridge’s vocabulary, presenting the scope of recent work (on view through 10/10 at Blackburn 20/20 Gallery, 323 W 39 Street, 5th Floor).

There is a moment in the show where the sentiments join and two visions become one: Butler’s “Dark Tree,” the lines of sprouting out branches in white against a black ground hangs next to one of Baldridge’s works that depicts a negative forest of tall bare trees- white ghosts against a charcoal sky.