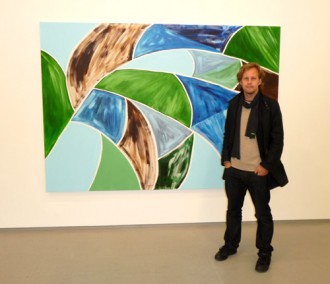 On day one of my brief visit to Tokyo, I met artists Benjamin Butler and Anne Eastman for a tour of some galleries in Kiyosumi-Shirakawa, culminating in an enlightening, private tour of Benjamin’s show at Tomio Koyama Gallery.

After we checked out hiromiyoshii, Taka Ishii, and KIDO Press, Ben walked me through each of his oil paintings and colored pencil drawings. He produced this work in three different locations throughout Japan: Kamakura, Tokyo, and Nikko. All of the work is from 2010, a revealing fact that makes us ask whether Japanese industriousness is transmissable, especially for wayfaring Western artists. Or maybe Ben Butler perspires paintings.

The new paintings initially look flat, decorative, patterned, and playful; but quickly reveal structural branches and skeletal armatures from which fields of briskly painted pigment seem to wave and stretch like flags and tarpaulin. The unfussy palette comes mostly from the tube, which must mean that Benjamin is more interested in color selection and arrangement than mixology. The results are as gratifying as a leisurely visit to an aromatic flower shop.

Some are bold and dominant, like active ingredients, rendering their quieter neighbors more like vacuoles of colored ground that still emerge, then hover, above the structural strips of unpainted, white canvas. Those strips are scored by unwavering paths of pencil. These abstract elements seem to “stack” or supplant each other, which reminded me of the way trees continue through the ground and into the earth. I accept the pencil lines as the roots of each painting.

Elsewhere, especially in the colored pencil drawings, patches of soft-spoken color gently nestle among their cohabitants, subtly modulated as if indexing a course of color-filtered lights. Some of these continue the “tree” shape motif, while others venture into crackling, fractal matrices.

Benjamin seems to pursue a matter-of-fact, solemn process that savors nature, yet still allows for – and even emphasizes – joyful spontaneity. The work can be analytic without feeling technical. In appearance, his kin could be Richard Aldrich, Raoul de Keyser, and even Daniel Hesidence.

In his Barnett Newman-esque monochrome work, Autumn 2010, Ben seemingly eyedropped Sublime orange from JMW Turner. The painting beams gleeful citrus at such penetrating intensity that it could cure scurvy and give Turner a jaw-grinding buzz. It is outstanding, ferrying us to the hearty north pole of Ben’s range of touch. His south pole adopts the sensitive delicacy and tensile reliability of a feather. In between, we witness heterogeneous dry brush scraping, saturated strokes, and velveteen coats populating each canvas and paper; and that range seems to be the subject matter, at least as much as color.