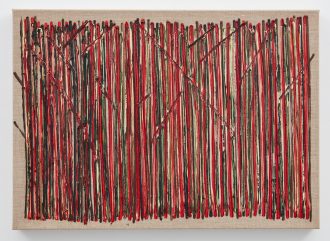 Benjamin Butler started painting trees about 15 years ago. At first they appeared in recognizable landscapes, sometimes with snowy mountains or by the sea, but they quickly shed their worldliness in favor of a minimal, partly abstracted tree-ness with which they could also masquerade as multicolored snake skins, veiny leaves backlit by the sun, or esoteric chemical diagrams.

In his latest show, at Klaus von Nichtssagend, Mr. Butler has narrowed his focus even further, to thrillingly psychedelic effect: His work now seems balanced on a razor blade between Conceptual practice and “The Starry Night,” but at the same time, somehow, it has ample room to move.

Across every one of the 15 paintings that fill this recently expanded gallerymarches a brigade of evenly spaced vertical lines. Mr. Butler works in sizes ranging from open notebook to barn door. But every painting uses the same untreated, burlap-colored linen; the thickness of the lines varies, yet only — as far as I could tell — among two or three brushes. And the brigades march in tighter or looser formation, but all stop equally short of the edges. In “Red Forest” and “Autumn Forest,” red lines scorched with black stand beside black lines bloodied red, all of them flickering yellow — but the colors are mostly somber. And then there are the branches, extending up from these “trunks” at 30 or 45 degrees, sometimes with a slight curve, usually in the painting’s upper half, with an effect more like that of a fasces or of an Ogham stone than of a forest.