The Seduction of Inscrutable, Shrouded Paintings 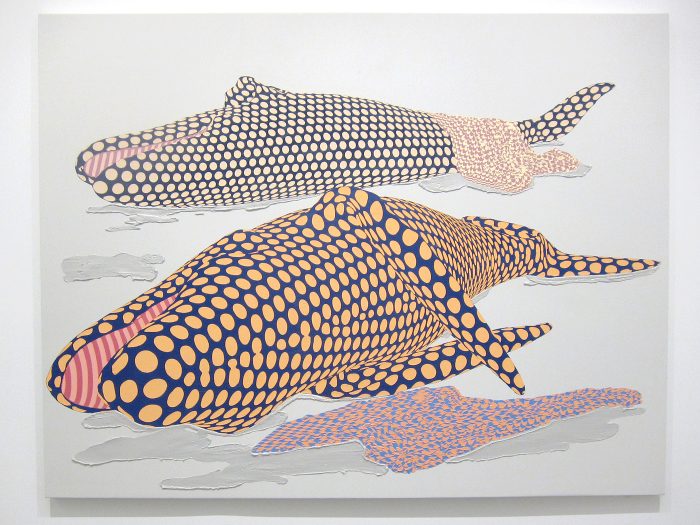 I find it easy to get lost in a painting by Alex Dodge even if I’m not entirely certain what the subject matter is. The Brooklyn-based artist has for years been refining a distinct technique that produces mesmerizing works that dance between painting, sculpture, and textile — their surfaces ripple with busy and vividly colored painted patterns that seem to swath mysterious objects in various fabrics; thick gobs of paint cling to areas of the canvas as if squeezed out like thick frosting or Easy Cheese.

Dodge’s solo show Love May Fail, But Courtesy Will Prevail at Klaus Von Nichtssagend Gallery — his first New York one in six years — offers a chance to admire these visual rhythms and textures up close in a series of a dozen or so new paintings. When you do, the precision of his paint’s application is astonishing, with the edges of each layer forming crisply defined ridges.

That’s largely because that favored technique of Dodge’s is grounded in technology: in a typical process, he creates a 3D computer model of an object of his choosing then digitally covers it with patterns in a way that resembles draped cloth. He then cuts stencils to replicate the final on-screen image, placing them against canvases and filling in the color by hand with thick dabs of oil paint. The results, therefore, also blend skills across time: Dodge is painting in the digital age, but the last steps of his process also pay tribute to Katazome, the centuries-old Japanese dying tradition of applying a paste to fabric through a stencil.

Love May Fail, But Courtesy Will Prevail, however, seems to celebrate Dodge’s affinity for and adeptness at this technique more than attempting to present a fully cohesive body of work. Although bound by visually similar patterns and colors, the paintings in the gallery’s front room feel disjointed from those in the innermost space.

The former shows definitively figurative forms of whales and primates that are cheerful yet unsettling: largely rendered in bright pastels are pretty patterns that replace what would be skin or fur — but the whales are beached, mouths open as if gasping for air; and the apes, with generous daubs of paint bordering their limbs, seem to plod on the canvas as if they had trodden through slick tar pits. These troubling scenes allude to current environmental issues, but the tactile allure of the varying textures and graphic polka-dots, stripes, and tire track-like motifs drew most of my attention. Part of the visual seduction stems from the effect of slight motion given by the meticulously painted patterns, with certain areas undulating like shifting fabric. This illusion is even stronger in two works in the hallway that render the American flag as if draped over mysterious, boulder-like objects: here, Dodge seems to play on the very materiality of the banner to amplify the sculptural-like quality of his paintings.

The works in the second room are much more inscrutable. Only one, “Aufstieg und Fall des Bürgertums,” becomes apparent after a few seconds as a pile of garbage bags — though not repellent as Dodge has painted them in varying colors of polkadots. Far from the wildlife paintings, the rest recall furnishings covered in sheets as in an uninhabited home (except here, the fabrics are incredibly graphic). Dodge does not identify the objects he chose as his models; their titles are simply suggestive and seemingly disparate, ranging from the linguistic (“camelCase” ) to the intellectual (“The Walloping Window Blind“) to the political (“Caucus”). But they compel you to imagine what lies beneath those colorful shrouds.

If you’re well-versed in Kurt Vonnegut’s writings, you may have recognized Love May Fail, But Courtesy Will Prevail from the prologue of his 1979 novel Jailbird — or perhaps you know that the seven words originate from a telegram the author received in 1978 from a high-school student. Sounding like an almost familiar aphorism, the isolated and allusive phrase captures the spirit of the exhibition well. Each canvas on view is similarly suggestive, breeding contemplation and curiosity of puzzles that we may never understand with utmost certainty. After seeing the works in the back room, even the animal paintings became enigmatic, as I suddenly realized I will never know the true nature of the things under those patterns, as they have undergone layers of translation as part of Dodge’s process. Teasing our perception, his paintings suggest how technology may veil our understanding of what we see. That’s a much-discussed topic today, but Dodge addresses it with subtlety without neglecting visual delight.