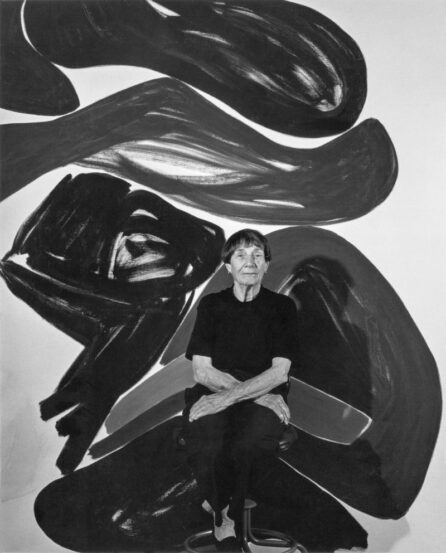 Virginia Holt (1915-2016) began painting in earnest in Southern California in the 1960s, and over the next decades, would establish a bold and experimental body of work that encompassed mural-sized oil paintings and collage, etchings, large scale soft sculptures, and ceiling-height burlap hangings. Holt’s earliest work was in figure drawing, but after studying etching and printmaking with Leonard Edmundson and painting with Emerson Woelffer at Chouinard Institute (later CalArts), her work quickly evolved into an abstract style.

The core qualities of her extensive body of work are characterized by a fundamental interest in color, shape, and energy, yet she remained devoted to the character and charisma of human faces and figures as she sought to understand and experience dynamic color and form on their own terms. Compelled throughout her career by the physical, emotional, and aesthetic challenges of working at a range of scales in abstraction, her largest paintings are mural-sized and the smallest are just one foot or a few inches square.

Holt’s consistent variety of innovative materials is testament to her experimental and open spirit in artmaking. Rarely did a woman of her era—in Los Angeles or elsewhere—work at such consistently large scale.

In this photo [Holt] was engaged in a studio visit (we think with Marion Oettinger, curator of Latin American Art and the former Kelso Director of the San Antonio Museum of Art). . . . In the foreground is a painted burlap piece that she sewed into a cushion shape and likely finished painting it after it was assembled. For many years various stuffed burlap cushions were in her living room, along with favorite paintings.

Mom was good at recruiting friends for studio help; one of my good friends, Jon Ballard, built stretchers for her during the mid-sixties; he used his parents’ garage for construction and transported the larger stretchers via bicycle towing a hand truck from Pasadena to South Pasadena

Her second studio was in an a larger, little used garage/warehouse. An earlier tenant cut records and it still had old first pressings on the walls. She invited Dr. Demento, a well known local DJ who specialized in older and rare music, over to show him the records and assess their importance (they weren’t worth much but was still fun).

Her final studio (pictured above) was in an alley of Pasadena behind the Ice House, a famous music and comedy club. This was her largest space yet high ceilings and skylights. A friend rigged up multiple bars and pulleys so she could raise and lower her larger burlaps. She was perhaps most productive in this space and often had friends visit for tea or lunch.

From 1967 – 1971, Holt worked closely with the South Coast Repertory Theater and other theatrical companies to create large-scale burlap tapestry stage sets including The Who’s Tommy and Hair.

“[The burlap curtain] began as three acrylic paintings on burlap bags for display in [Holt’s] garden. Then the project expanded into a set of 12 paintings, and finally mushroomed into a collection of 100 different paintings. Her paintings were inspired by the individuality of each sack. One example is the sack called “Marcel Marceau.” She started on this one after seeing the French pantomimist in performance, explaining,’The two large holes in the back reminded me of his eyes.'” — 1967, Palo Alto Times

Ben Holt writes: “The music of the 60s ‘hit’ us both at the same time. A friend was a local concert promoter and gave us free tickets to many great concerts (Hendrix, Dylan, Joplin—a long list), we continued going to hear music together for a long time. She painted portraits of these musicians and many others on burlap, which she eventually started sewing together to become curtains.”

Studying printmaking with Leonard Edmondson at Pasadena City College, Holt incorporated her mastery of technique into her larger practice, processing and printing her own plates for years to come. Three intaglio works from the 1970s are included along with her paintings in the gallery’s current show. These uneditioned prints demonstrate multiple processes including etching and aquatint, spitbite and drypoint. The works have a remarkable materiality, exploiting the effects of richly dark ink and heavy pressure on the paper through deep tonality and embossment.

“[This book was] made for me by my grandmother when I was 4…She imagined me in a furry white hat, drew my beloved bed and rendered me as a strawberry at the North Pole.”

“She loved color and was very free with all the materials she worked with. She sewed and collaged on everything—boxes, fabric, fur, etc. …“

Pamela Jorden writes… “In 2009, I curated a show entitled Sun Zoom Spark at WPA, an art space I collectively ran with friends. Partially inspired by Virginia and her appreciation of the music and poetry of Don van Vliet and his band, the show’s title is taken from the Captain Beefheart song. I included a large painting by Virginia and several of her small abstract works. The exhibition reflected the characteristics of kaleidoscopic vision, in particular the ways it fragments space and alters images through perspectival shifts and reflections. . . . The use of color and form was what I found immediately striking in Virginia’s paintings. Her paintings contain gestures and interactions, both balanced and precarious. They have eyes, torsos, arms, and legs. The paintings . . . are responses to music, rhythms, motion and flow, and are also full of energy and texture that are beautifully frenetic and fractured.”

“I think her first etching may have been of my hands. I was an unpaid ‘laborer’. I helped stretch the canvases—something we did in the evenings in the kitchen. I made endless trips to her studios; to move paintings around or help with burlaps and theater curtains.”

Woman with a Headdress, 1985
gouache and ink on rag

“She took incredible trips with our father all over the world; for instance, on a Russian icebreaker through the Northwest passage, two trips to Antarctica to see the penguins, New Guinea, Easter Island, Tahiti. She took a sketch book on all her trips, including sailing!”

Reach out to us and let us know if you have any questions.