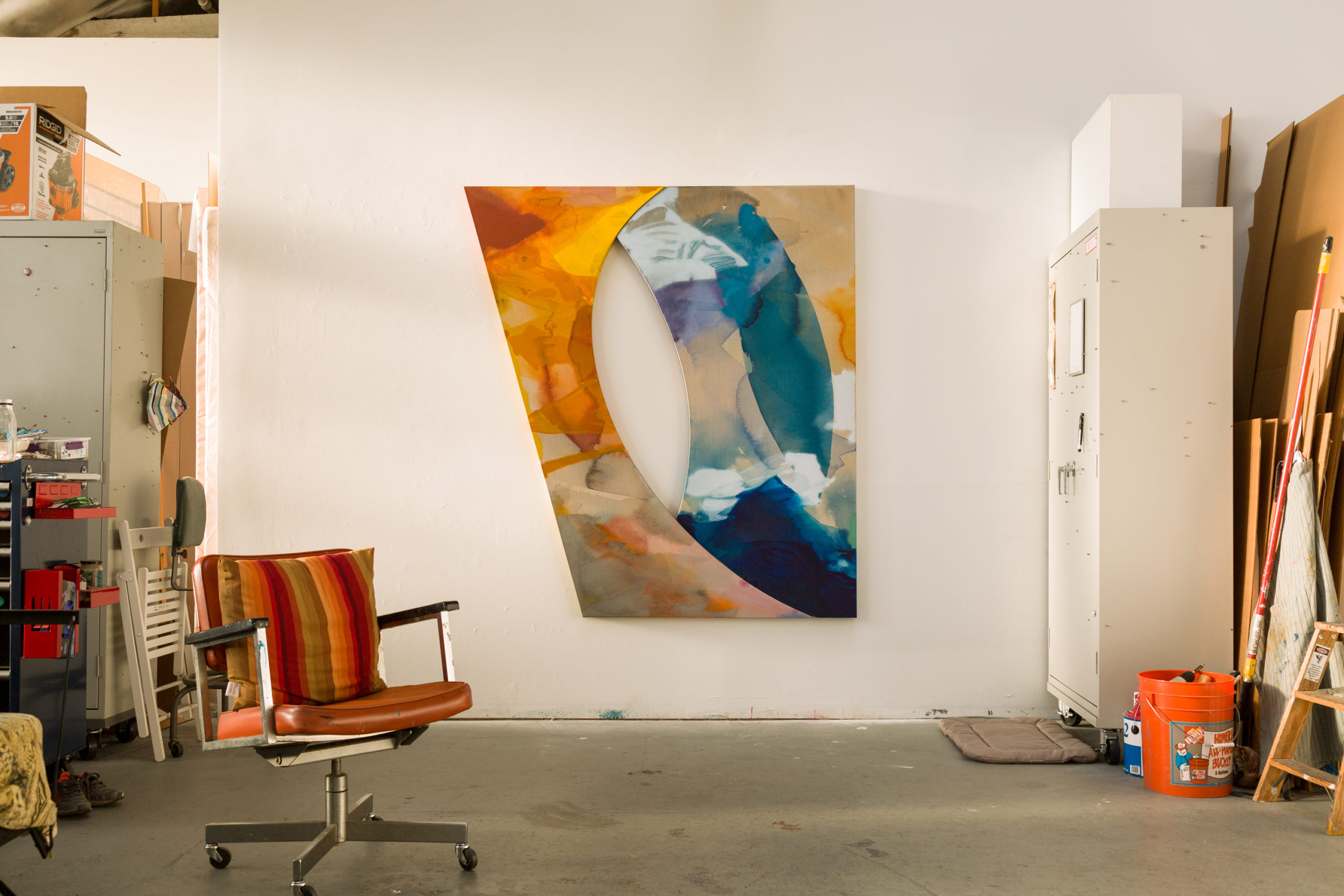 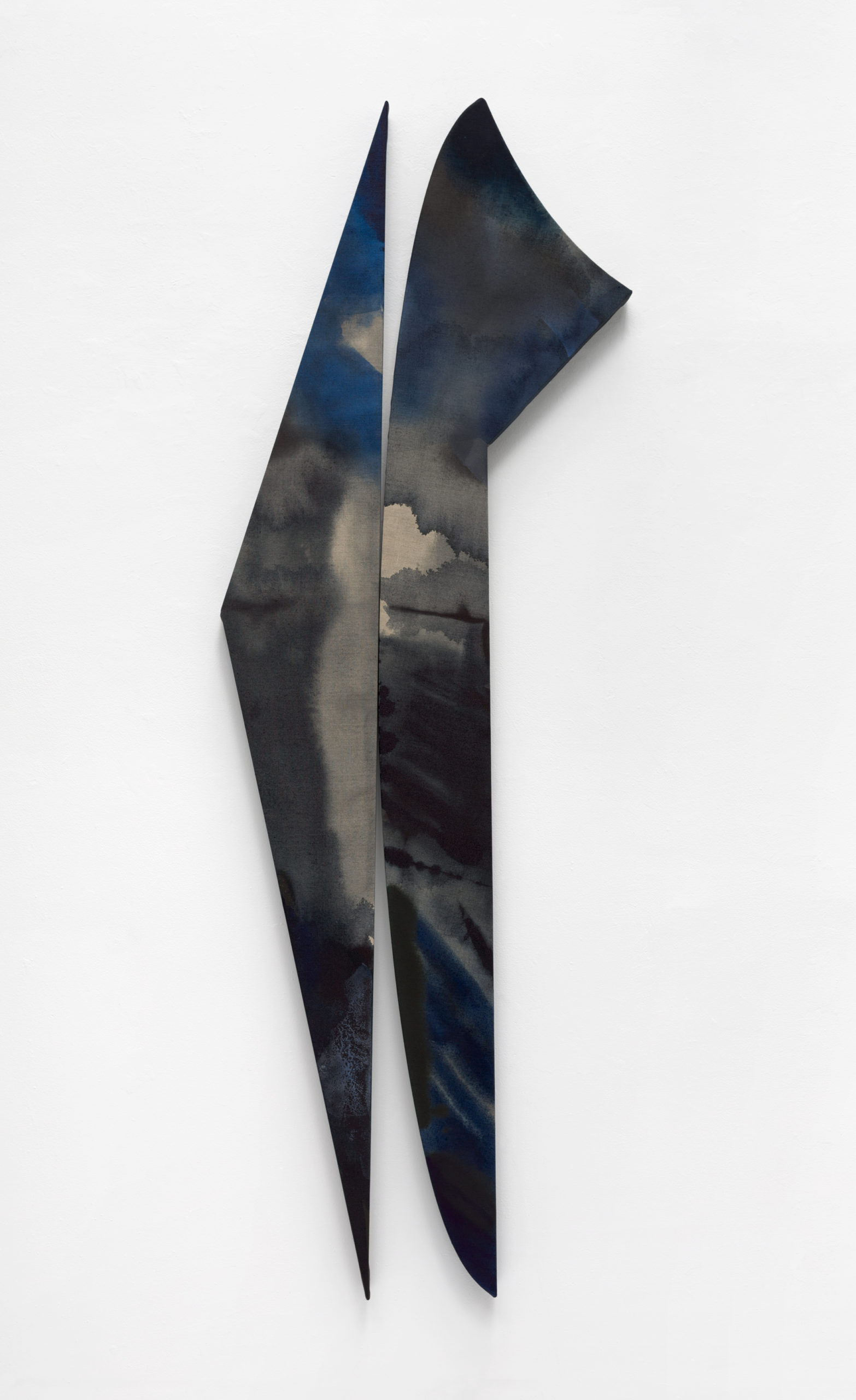 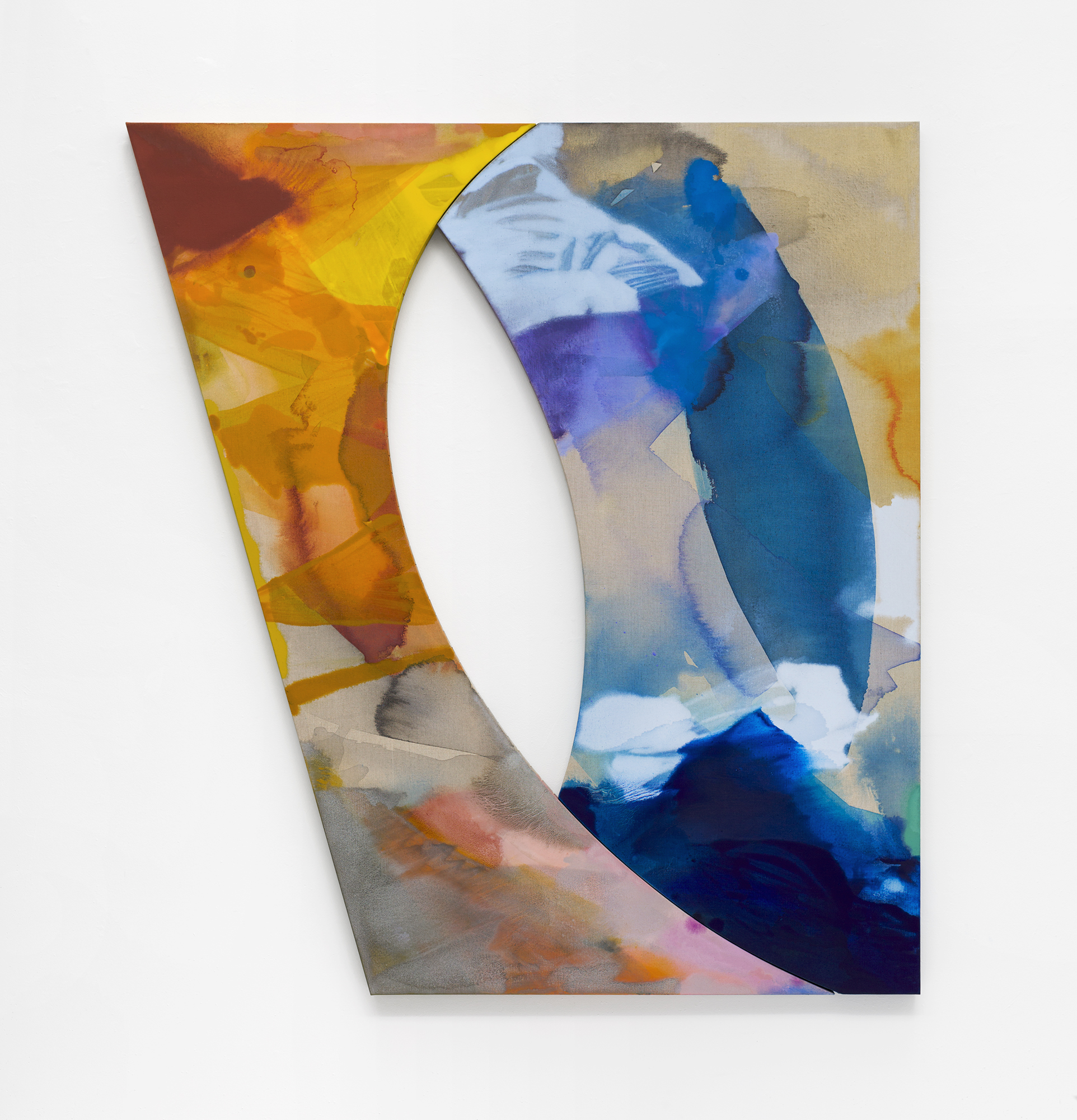 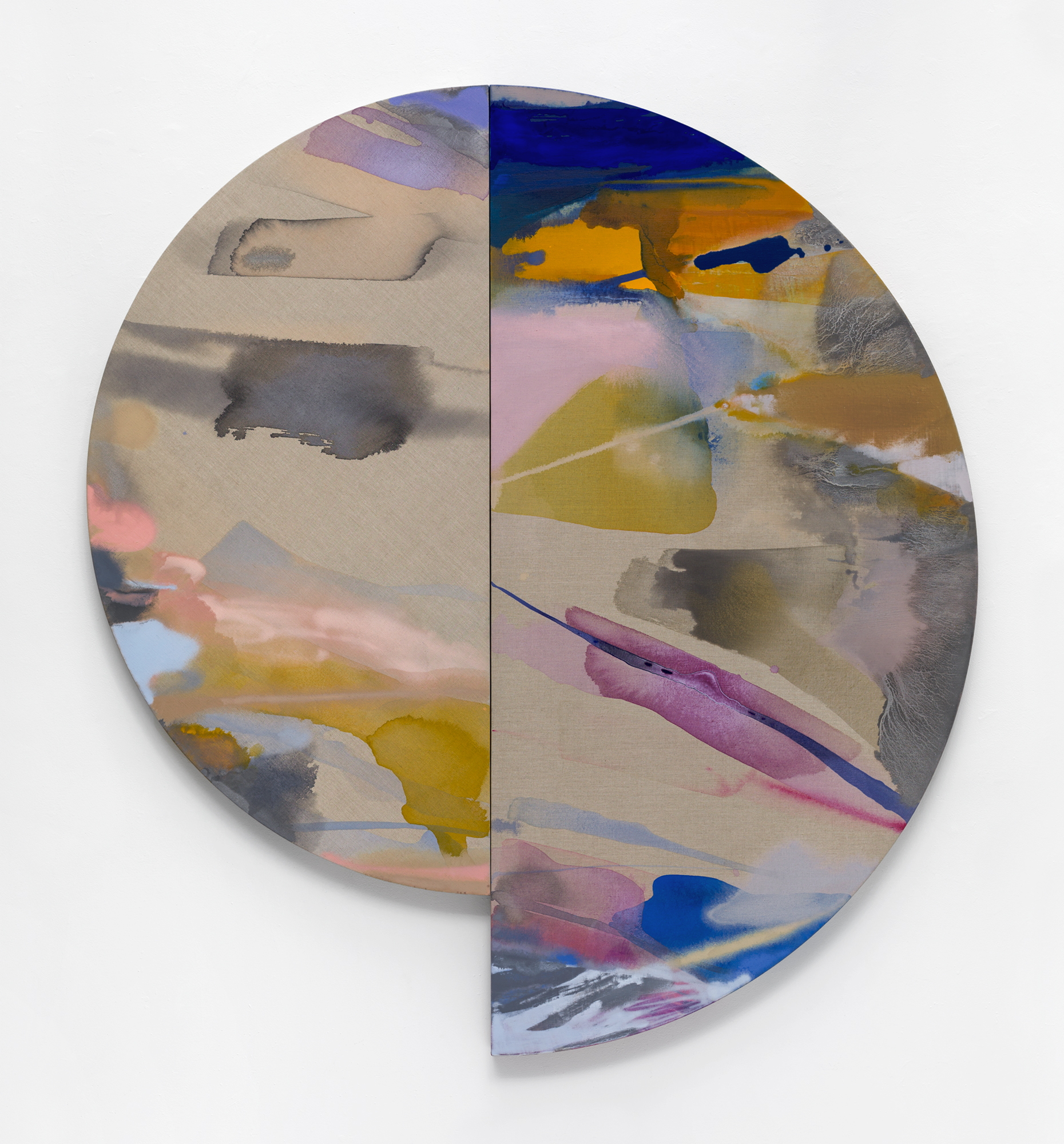 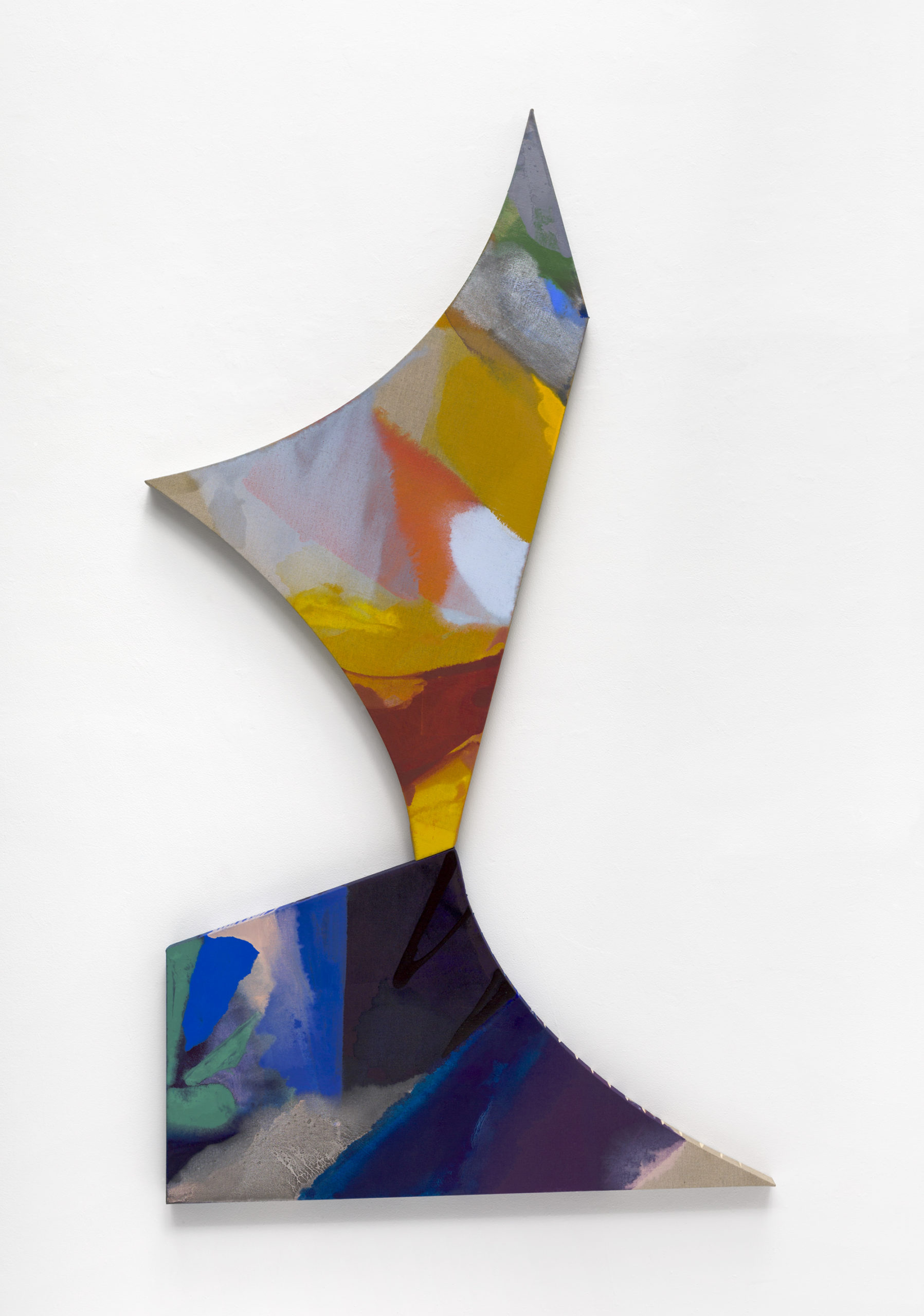 Reflector, a new exhibition of five large scale oil paintings by Pamela Jorden will open in the main gallery on February 21 and run through March 29. Each of these new paintings consist of two separate shaped canvases adjoining to form a single compositional work.

A theme that has been recurrent in Jorden’s practice for the past decade, that of a cut or a rupture in her compositions, is pushed further in this body by the physical divide between halves. The works function as diptychs, but break from the symmetry of the circle or rectangle, allowing for their shapes to become more complex. The scale and form of the paintings allude to the artist’s full arm span and reach, creating boundaries to their dynamic thrust. Jorden was inspired by contact improvisation in dance, constructing reactive moments in her work where the canvas and paint touch. The show’s title, Reflector, alludes to the interaction between two parts of the diptych, or two bodies.

Applying the paint in directed, pushed and dragged flows creates markers of Jorden’s active and physical manipulation of materials. The linen has been pulled, stretched, and incised to wrap around the convex and concave curves of their stretchers giving solidity to the atmospheric qualities of the painted surface.  Jorden often refers to landscape and qualities of light in her work, associating the exposed areas of linen with the color and texture of the sandy soil of Southern California, where she lives. This new work introduces implications of the body and movement.

Coinciding with her show in the main space, Jorden has curated a selection of the late Virginia Holt’s work in the front gallery. The two artists became friends in 2007, sharing an intergenerational relationship and frequently conversing about painting. The work in Reflector was made knowing that Holt’s work would be on view in the adjacent gallery. Jorden chose and responded to Holt’s striking compositions of bold, colorful forms and etchings with dense, collage-like textural qualities that were inspired by the artist’s figure studies. Jorden describes Holt’s work as “containing gestures and interactions, both balanced and precarious. They have eyes, torsos, arms, and legs. The paintings are a result of relationships and friendships and interactions. They are responses to music, rhythms, motion and flow, and are also full of energy and texture that are beautifully frenetic and fractured. Virginia’s paintings communicate a visual experience inspired by life lived with colors and impressions affected by constant transformation.”