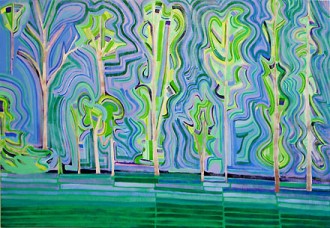 How curious is it to assemble a show of works by some of the more interesting younger “Goth” artists — at this point, one would have to say that “Goth” is the Generation Z answer to 1980s “Neo-Expressionism” — under the rubric of color? In the distant avant-garde past, the notion of pure color signaled a utopian idealism, and more recently a particularly materialist notion of color was brought front and center by Greenbergian formalism.

But hardly anyone is interested in these kinds of ideas anymore — a sure sign, among ever-contrary art-world youth, that they’re due for a revival. Who was it that commented on the beauty of the wound, anyway? All those dark purples, mauves and greenish crimsons come to mind at “Palette,” a group show of works by seven young artists organized by artist and curator Augusto Arbizo for Greenberg Van Doren Gallery, where he is on staff.

The Miami artist Naomi Fisher makes both color photographs of pseudo-savage young women prowling through the Florida wilds as well as ink-on-vellum paintings of viragos and vixens. In “Palette,” the neon colors of Fisher’s paintings glow with toxic glee, their women rendered with a painterly network of globs, blobs and splatters. Hung on a baby blue wall, which further accents their Lite-Brite hues, Fisher’s psychedelic rave sisters frolic in their own tripped-out world.

Munich artist Andrea Hanak contributes small oil-on-wood paintings that bring to mind nothing less than Baudelaire’s Fleurs du Mal, so abjectly do her brightly colored flowers emerge from their shadowy black fields. Similarly earthy are Laleh Khorramian’s paintings, done in oil on propylene and evocative of the frottage landscapes of Max Ernst. Chunks of paint, Twombleyesque scratching and a few happy accidents combine with earthy colors to create burned-out, surrealistic scenes. Both of these artists give a sense in their works of control mixed with chaos.

The sophisticated use of color in paintings by Martin McMurray and Andreas Leikauf are overshadowed by their overtly antisocial narratives. In the case of McMurray, his Bloodshot and Glowing No. 1 is a cartoon-style depiction of a man with a bullet hole in his head lying in the snow. This sinister scene, however, is rendered in moody blue-grays and browns, accented by a Gustonesque red jacket on the sorry victim — colors quite beautifully chosen, come to think of it.

Leikauf addresses scenes from contemporary urban life with quickly rendered images of objects or buildings, apparently based on photographs (though hardly Photorealist), accompanied by painted captions such as “we will rock you.” With their suggestion of both mystery and the mundane, these narrative paintings are reminiscent of Robert Longo’s early “Men in the Cities” drawings. Leikauf gives each of his paintings a single dominant color, which creates a graphic quality suggestive of a silkscreen print.

The one sculptor in the show, Chris Caccamise, is a New York artist who showed last year at Sixtyseven in Chelsea. His sign-like objects, most of which involve words or phrases done in colorful letters, share a handcrafted blend of solidity and fragility. One wall-mounted piece is reminiscent of the well-known Pepsi-Cola sign originally erected in 1936 in Long Island City. Friends Come and Go. . . , like his other work, is made from Bristol paper and enamel paint. The enamel colors, often used by sign painters, have a candy-colored aspect that matches the pop quality of the forms.

Benjamin Butler, who formerly showed at Team Gallery in New York, most directly uses color to achieve an otherworldly effect. The large painting Untitled (Twelve Trees) combines synthetic greens, blues, violets and yellows to render a frieze-like row of trees, while Fifty Five Trees in a Sunset features horizontal swathes of unearthly pink, orange and yellow. Butler’s landscapes clearly belong to a future in which nature, and natural colors, are things of the past.

CHRIS BORS is an artist based in New York.