Native Texan, UT Austin grad and Greenpoint resident Barry Stone also works with the snapshot esthetic, as seen in “Your Name and Mine,” his solo show of seven large color C-prints on view through Feb. 6 at Klaus Von Nichtssagend on Union Avenue. In Ann at the Window, Seattle, Washington, 2004, a still-young woman seen in profile, hand on hip, looks expectantly out of a large window. She is framed against the gauzy curtains she delicately parts. The specificity of her gesture is just sufficient to imply a narrative.Other storylines are left dangling. In Dad in the Corn, Blaine, Washington, 2004, a white-haired fellow in a blue shirt busies himself with something or other amid leafy green corn stalks looming like jungle growth. The tiny, isolated subject of Boy Snorkeling, Seaside, Florida, 2002 is comically close to shore, as if having been cautioned about the undertow. But the formally streamlined Hula Hoops, Scarsdale, New York, 2004 boils down to two pink ellipses in the sodden turf. C-prints, they are $1,500 each. 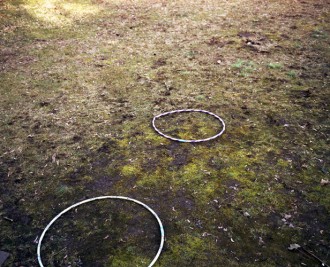