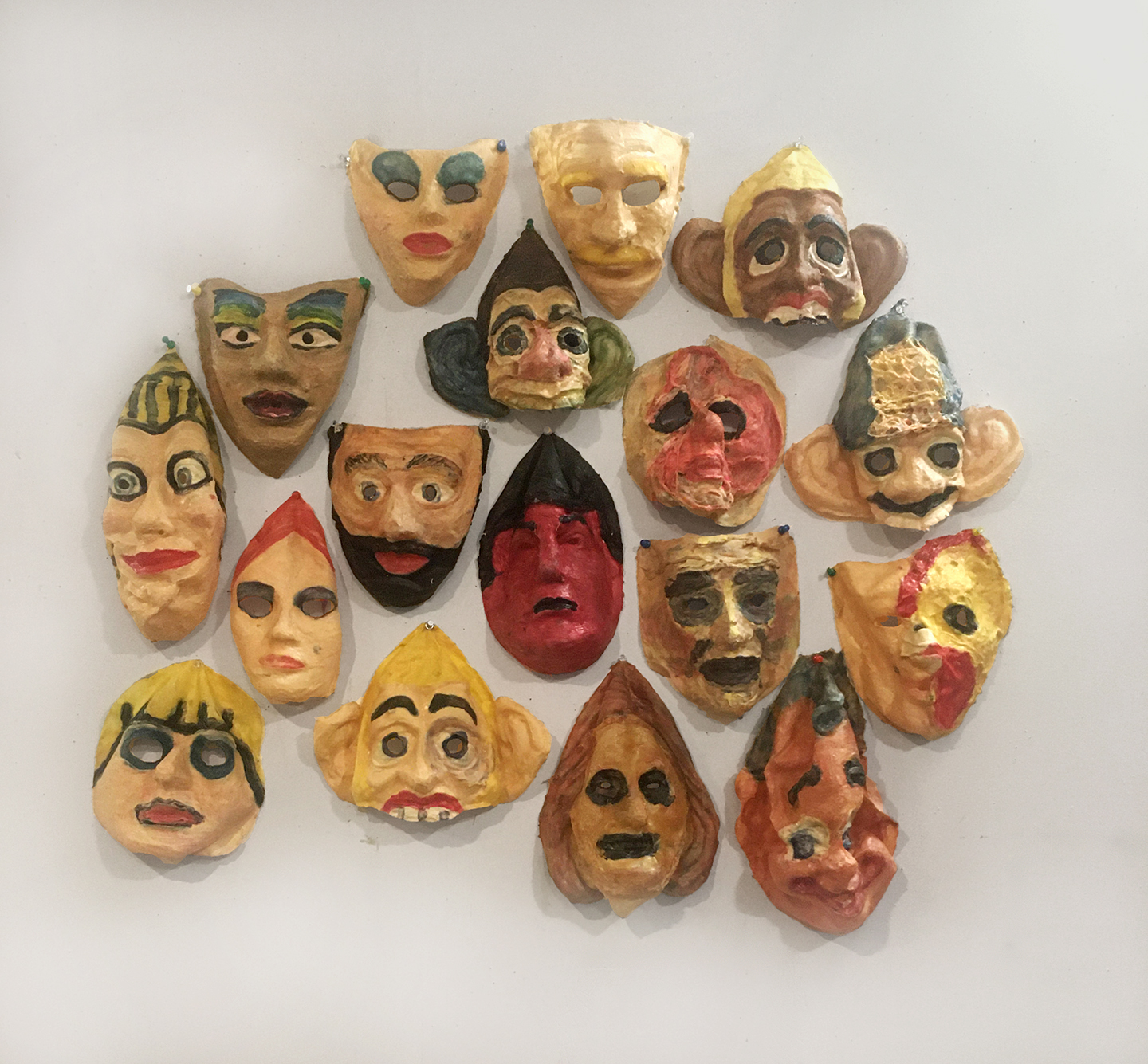 Klaus von Nichtssagend Gallery is pleased to present a show spotlighting Masks in the practices of 15 contemporary artists.  Masks protect and pervert, decorate and distort, provide clues towards identity while potentially obscuring easy readings. The artists in this show approach masks from myriad vantages and explore their multiple meanings through painting, ceramic, sculpture, photography, video, animation, and performance.

David Wojnarowicz’s canonical “Rimbaud in New York” photograph serves as a historical antecedent for the work of living contemporary artists including David Kennedy Cutler and Michael Mahalchick. Kennedy Cutler presents a garment rack donning multiple “clone” bodysuits of himself. These “Daves” will be activated by the artist during the course of the exhibition in much the same way that Wojnarowicz donned the visage of Arthur Rimbaud around various sites in New York. Michael Mahalchick’s rubber casts of commercial masks aping public figures or archetypal characters take on a sinister vacancy when painted grotesquely and pinned to the wall.

David Torres’ films feature masked (and unmasked) heroes and villains playing out roles navigating a fantastical lore of the artist’s devising. In Trenton Doyle Hancock’s drawing a figure’s head is encompassed by a sphere, covering a bowed, featureless face. Turning inward, this body is uncovered to reveal a mysteriously empty space.

In other works, the face itself becomes a mask.  When faces are seen as windows into a person’s psyche, where is the line drawn between bare presentation and performance? Nicole Eisenman’s print “Twelve Faces” shows a tightly packed frame of faces, each up for individual examination and that of a group dynamic. Amna Asghar’s works present commercial imagery from Pakistani advertisements for beauty and skin products, meant to sell an ideal form of beauty by altering one’s face through makeup. Stacy Lynn Waddell’s marks of singed paper also distort faces, here with hair seemingly out of control and contrasting with traditional ideas of beauty and the upkeep of appearances.

In Demetrius Oliver’s 2008 work “Bust,” the artist literally obscures his own face with smears of cake frosting, creating a discomfiting distortion of his features. This move visually pushes the portrait towards a classical sculptural bust calling us to acknowledge the cultural traditions of the genre. Sarah Peters’s plaster and bronze forms similarly draw attention to formal qualities of classical sculpture while updating their subjects to contemporary figures of dolls, mannequins and automata. Leilah Babirye’s ceramic wall sculptures from her ongoing series—“Kuchu (Queer Ugandans)”—are inspired by mask forms from West Africa. Babirye imagines and creates a community of liberated queer Ugandans asserting the presence of historically oppressed and denied identities.

In Arnold Kemp’s works on paper, collectively titled “INDEX” tin foil is inked and run through a printmaking press with sheets of antique 19th century paper, impressing a rough amalgamation of eyes and mouth into their surfaces. The reflective nature of the foil is obliterated in its reproduction, forcing a more difficult notion of mirroring. Rachel Harrison’s sculpture from 2010 features a wood panel with two painted black splotches and a surgical mask hanging off the top right corner. While created in a different era, the work rings prescient in the context of 2020.